What makes an excellent musician with rock-star swag a lot cooler? Simple: just put any one of them on top of a badass two-wheeler. In an instant, their coolness, and even sex appeal—both already at very high levels—will instantly get an unnecessary boost. It seems unfair, but the aura surrounding artists and their mean motorcycles just forces you into liking them even more.

If their songs impressed you before, then prepare to become even bigger fans as they take on a different kind of road tour.

Kamikazee’s frontman is known for his wild performances on stage, but when it comes to his love for motorycyles, he’s definitely not messing around. His motorbike journey started out with scooters, until he felt it was about time he moved onto bigger wheels and louder engines.

As of this writing, Contreras owns two bad boys: a Honda Rebel he named Gringo, and a Harley-Davidson he affectionately calls Roberto. By the way, Contreras takes great pictures—another reason why he really seems built for a lifestyle that offers a ton of amazing subjects.

Contreras really has an infectious energy—so infectious in fact that he was able to convert his bandmate into becoming a motorcycle enthusiast just like him. And like Contreras, the Kamikazee shredder can now be seen riding a beautiful Harley-Davidson whenever he heads to a recording studio or a fantastic out-of-town destination.

Marasigan is not a moto geek like he is with sounds. For this OPM legend, it’s all about practicality. He sees motorcycles as his way out when facing Manila traffic. But whatever his reason might be, the one thing he does absolutely right is ride with style.

Come to think of it, why wouldn’t he? He’s rock-and-roll royalty, so it’s only right that he looks the part. His Fart Monkeez custom Kawasaki Boxer Stracker and Husqvarna Svartpilen 401 certainly do the job.

Let’s check out another Pinoy music icon and his bikes, shall we? Yep, we’re referring to Buendia and the monsters he keeps in his garage. According to the chief, it was love at first ride for him the moment he tried out a Honda scooter back when he was still in high school.

That being said, he wasn’t able to buy his own motorcycle until a few decades later. Well, was it worth the wait? Hell, yeah! At the moment, he has a Fart Monkeez custom Honda XR 200, a Ducati Scrambler, and the final boss, a Harley-Davidson Sportster 48.

PNE is one of the most famous Filipino bands ever. Their longevity? Unrivaled. One of its cornerstones plays guitar and is a talented songwriter. And apparently, he’s also got a great eye for fabulous motorbikes.

In Chee Kee’s possession is a custom Motorstar Cafe 400, which was a podium finisher at Moto Builds 2017. It’s his go-to ride for long solo trips, such as his one-man adventure in Laoag, Ilocos Norte. Meanwhile, his super fly Honda EX3 only proves that his moto palette is quite exquisite.

The man behind the booming sound of the classic rock anthem “Laklak” is still a hot commodity to this day as he continues to write songs, and play drums for bands like Sandwich and Pedicab.

Offstage, Dizon still finds a way to stay rocking through his love for retro motorcycles. Be it his Vespa scooters, his Kawasaki W800, or his Royal Enfield Interceptor 650, the veteran drummer is in his element whenever he goes on the road.

Representing the women is Gaki Azurin. She’s a fitness trainer and drummer for punk rock band Flying Ipis. She also happens to be a co-founder of the all-female motorcycle group Litas Manila. They’re an extension of a global charter that aims to grant support for all women—with or without bikes. Impressive!

You can usually seer in her Ducati Scrambler or on Youtube doing motovlogs. Yep, that’s her looking invincible with her Ironman helmet and BMW F 900 R:

If you haven’t heard of a metal band with a saxophonist, then you haven’t heard the genius of COG. They’ve got Honasan, a tremendous sax player, and if you didn’t know, he’s got a tremendous-looking Harley. Seeing him atop his ride, you’d get the idea that this guy does savagely cool things like playing the said instrument for an amazing metal band.

Six The Northstar is a music producer who dabbles in hip-hop, trap, jazz, funk, and all sorts of genres to create new sounds that can always put you in a proper mood. If that’s not cool enough, then you ought to know that he used to host FlipTop rap battles back in the day. And if that’s still not cool enough for you, feast your eyes on the choppers that he messes with. Now, tell us, don’t you want to join a group ride with this guy?

People used to recognize Zach for being the drummer of the accomplished pop band Imago. Nowadays, you could say he’s better known as a motorcycle expert. He’s got one of the best motovlogs, and for sure, you could learn a lot listening to this dude.

If you’re ever going to follow just one musician motorcycle rider on social media, you’ve got to pick Lucero. His uploads are informative and entertaining—all top-quality, much like his bike collection.

While with Moonstar, Bernaldo swooned the band’s female fans with the bass guitar, especially on hit songs like “Migraine” and “Torete.” Currently, he’s taken over PNE’s original bassist Buwi, who had migrated to the US.

In between gigs and recording, Bernaldo continues to slay, going into biker mode as he swiftly navigates his Ducati SuperSport:

To finish things off, let’s hit the dance floor—well, sort of. One of the best DJs in the country certainly knows how to keep a party lit. And from what we saw in his Instagram, it looks like Miranda can light up the highway as well with the help of his grey Royal Enfield Interceptor. 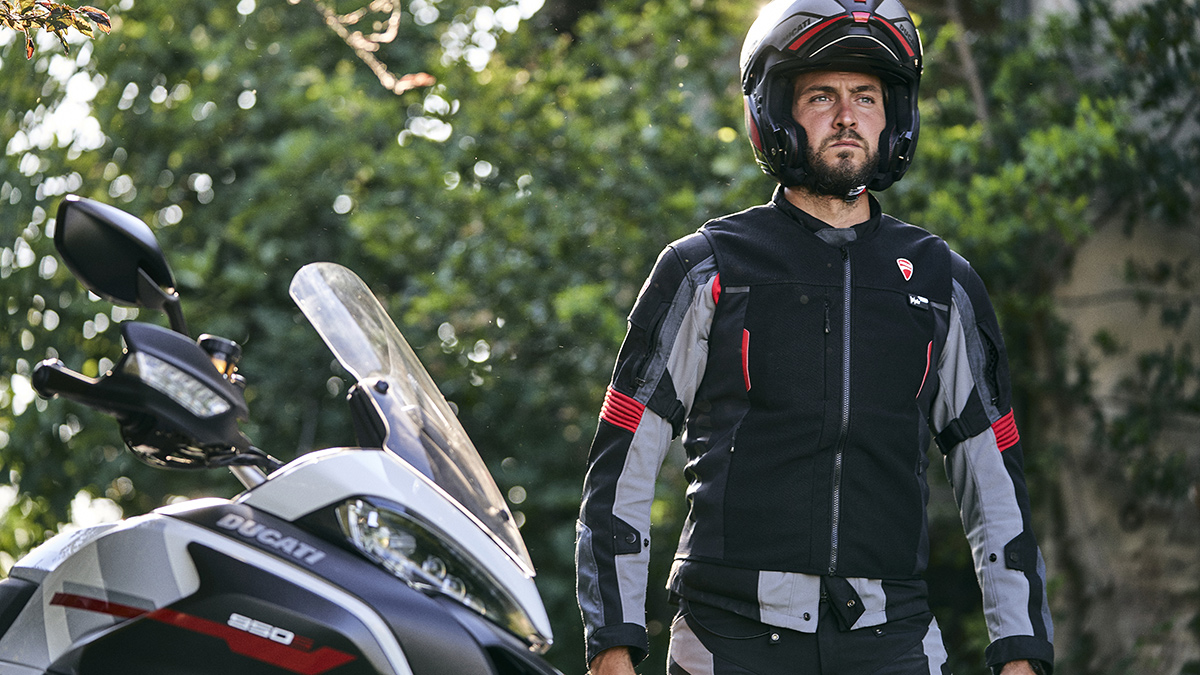 Ducati’s new smart jacket is essentially a wearable airbag
View other articles about:
Read the Story →
This article originally appeared on Topgear.com. Minor edits have been made by the TopGear.com.ph editors.
Share results:
Retake this Poll
Quiz Results
Share results:
Take this Quiz Again
TopBikes Rating:
/20