The Brits sure know how to make a good motorcycle
by Matthew Galang Mar 30, 2021

If their representation in films, shows, and video games are any indication, Triumph’s motorcycles lend themselves well to anyone looking to make a statement. I got to experience that cool factor myself when they lent me one of their most iconic bikes- the Street Triple R.

With a peppy engine, top-spec components, and the handling dynamics of the Daytona sport bike, the Street Triple platform, or ‘Striple’ as it’s affectionately called, is hard not to like.

Does its nearly optimal combination of aggression and refinement translate well into daily rider duties? Read our review below to find out. 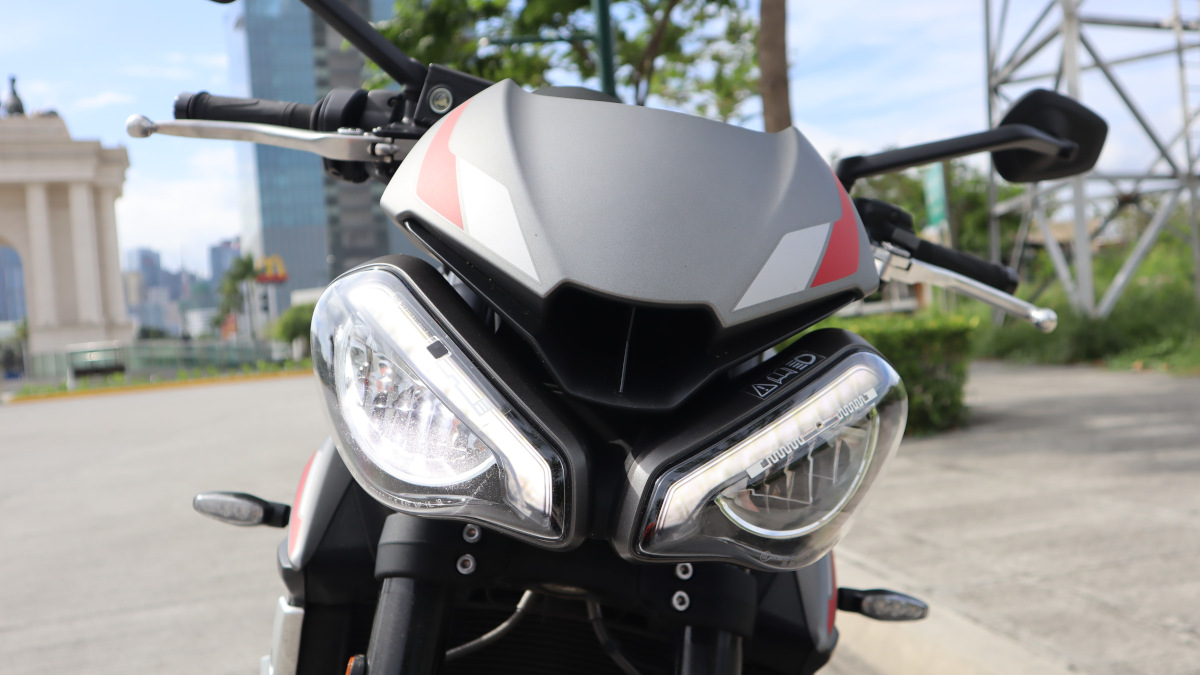 Right off the bat, the Street Triple R’s styling is something of an acquired taste. From the tank back, the bike is essentially a Daytona 765 without the fairings and has the looks of a svelte, sexy sportbike. In front of the wide handlebar is the signature Street Triple twin-bulb headlight, which for this generation looks like a dragonfly’s eyes.

Personally, I like how the headlight looks. It’s quirky and distinctive without being too weird, and the functional air intake combined with the furrowed-eyebrow daytime running lights look especially mean.

Headlight aside, the Street Triple R is an absolutely gorgeous bike. Each and every detail is polished to perfection. From the muscular sculpted tank to the beautifully angled swingarm, every component of the bike has been made to fit its sporty streetfighter aesthetic. 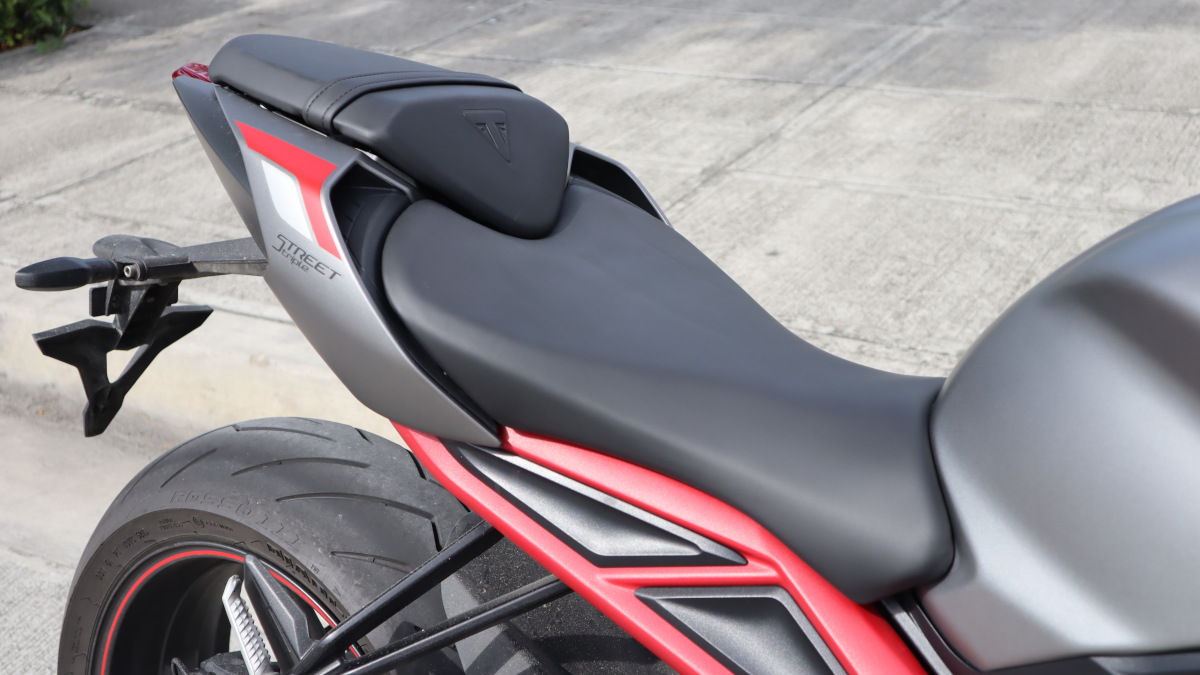 The unit I was lent had the Low Ride Height (LRH) option installed, and the first thing I noticed was just how low the seat is. At 30.7 inches high, the seat is perfect for my 5’7” frame, as I can get both my feet flat down on the ground and hustle the Triumph through tight spaces with confidence.

Seat height aside, the Street Triple R’s saddle is a surprisingly comfortable place to be. The seat is well-cushioned and grippy while still easy to move around on, the foot pegs are rear set but not too cramped, and the handlebar is wide and easy to reach. The sculpted tank also serves as a comfortable place to grip onto with your thighs. Engine heat is noticeable, but isn’t quite as bad as on other European motorcycles.

According to my pillion rider, passenger accommodations on the Street Triple R are quite comfortable. The seat is plush and decently sized, and the foot pegs aren’t too far away. 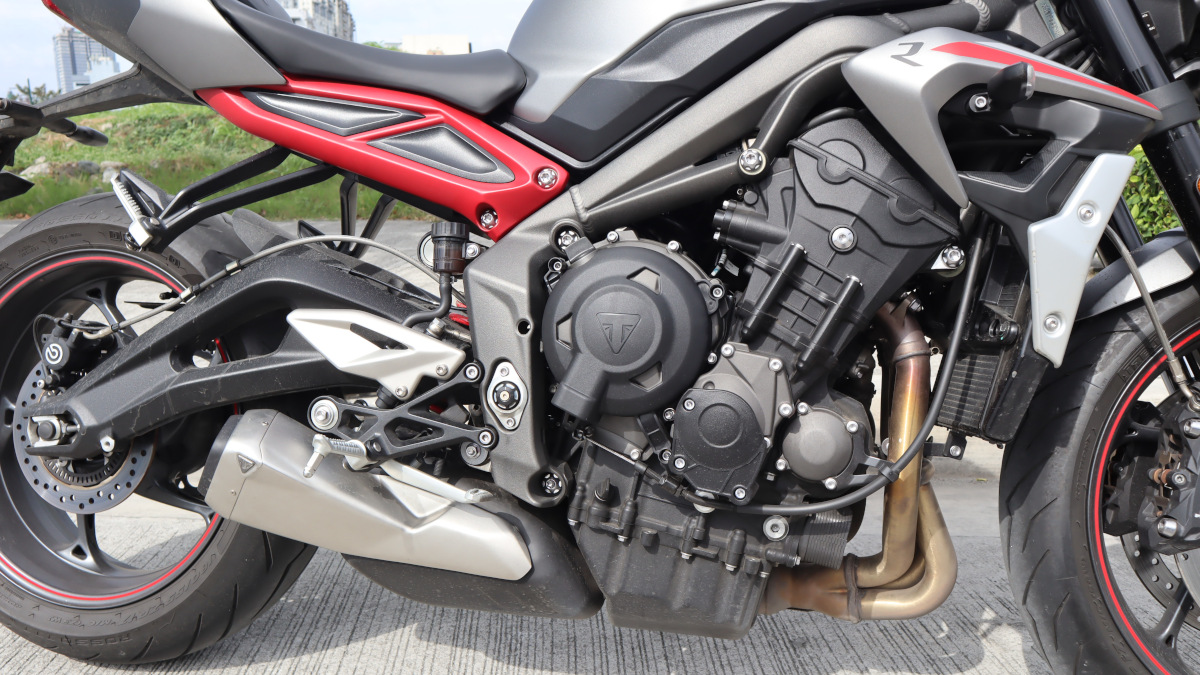 The Street Triple R’s namesake and main party trick is its 765cc liquid-cooled, inline three-cylinder engine, and for good reason. The moment you pull in the clutch and hit the ignition switch, the engine roars to life with the force of all 116 of its well-fed British horses. Torque isn’t too bad either, with 77Nm on tap at 9,400rpm. Twist the throttle with some vigor and you’ll hit highway speeds before you know it. Acceleration is immediate but refined, with oodles of torque all throughout the rev range as well as ample top-end power.

All riding modes on the Street Triple R work as advertised—Rain dials the power back and cranks up traction control, Road is more fun but still a bit sensible, and Sport is the way to go with the bike’s full output at your disposal. If you wanna mess around with the settings, then the rider-programmable mode is for you.

Shifting is slick and satisfying, thanks to the Triumph Shift Assist bi-directional quickshifter, though you won’t have to shift too often because of how usable the entire powerband is. 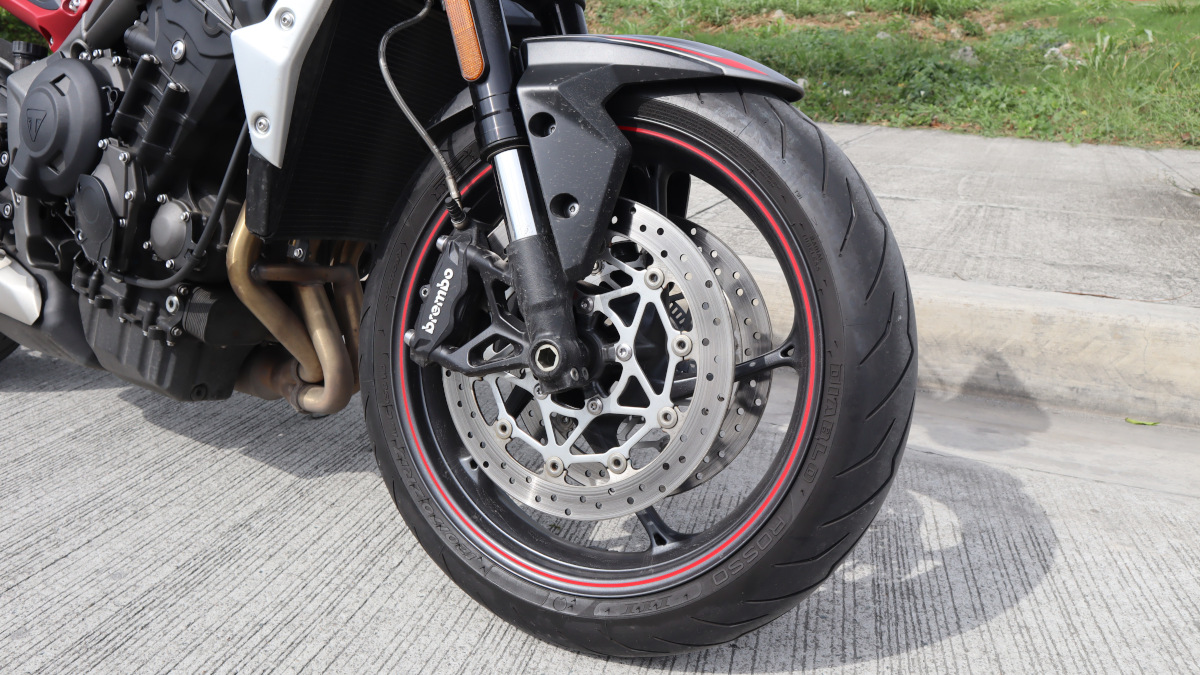 Adjustable Showa front and rear suspension might not be bleeding edge MotoGP-level tech, but it’s more than enough to allow the 168kg bike to handle like an out-and0out sportbike. The well-engineered chassis and suspension, combined with grippy Pirelli Diablo Rosso III tires, make for almost telepathic handling on the street that’s only held back by the level of your riding ability.

Braking is similarly impressive, with Brembo M4.32 radial-mount monobloc brakes bringing the Street Triple R to a stop with ease. Lever feel and response get top marks, with more than enough bite force to get a bike of this weight under control even at triple-digit speeds.

A drawback brought about by the LRH option’s lowered suspension is the bike’s tendency to make sabit on particularly tall speed bumps. It isn’t bad to the point of concerning, but it’s apparent enough to keep in mind. 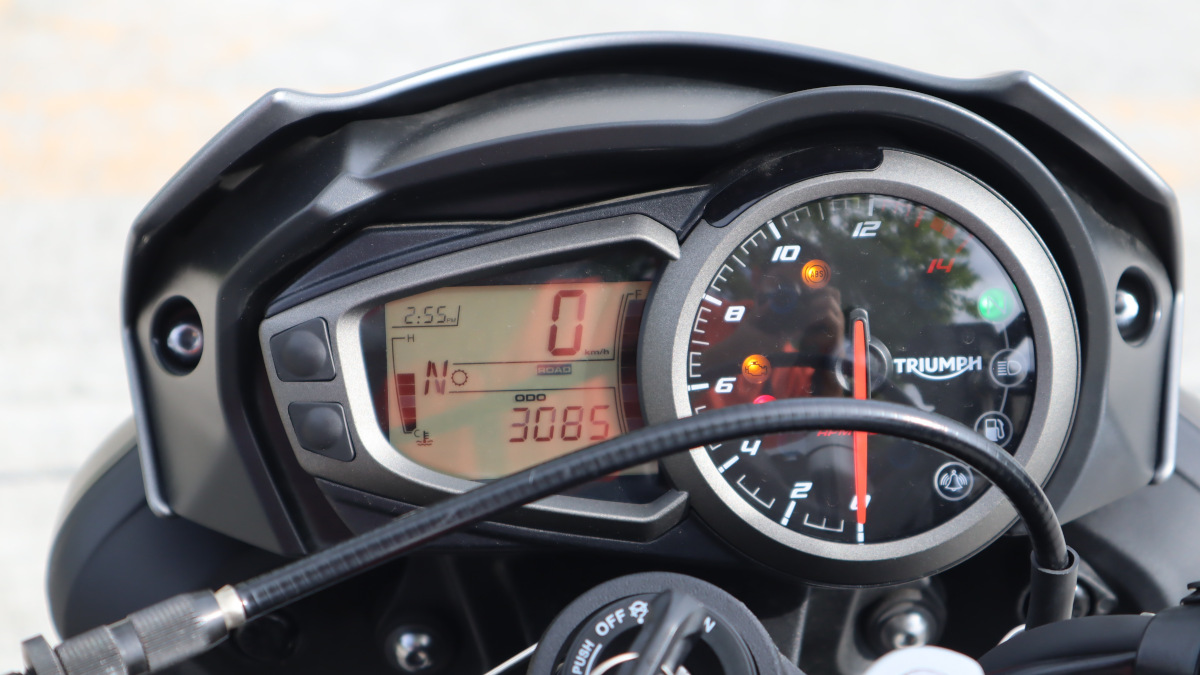 As evidenced by its LCD dash and analog tachometer combo, the Street Triple R is focused on providing the rider with a purer experience unsullied by too many distractions. Even then, the Street Triple R still comes with some neat extras, such as the slick bi-directional quickshifter, adjustable brake and clutch levers, programmable shift lights, gear position indicator, and an under-tail storage area. 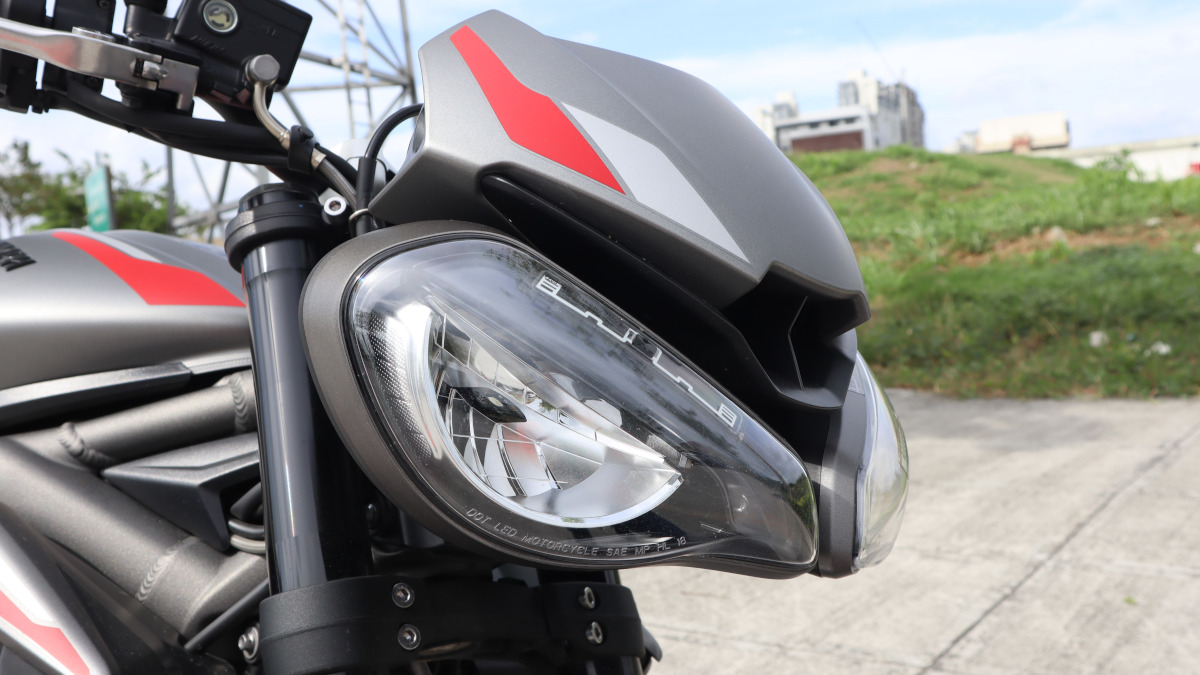 The Street Triple R is the first Triumph I’ve ridden for any significant amount of time, and if my experience with it is anything to go by, the British brand certainly deserves all the praise it receives. The Street Triple R is potent and exhilarating, yet refined and easy to ride. It’s aggressive and sharp, but comfortable and composed no matter the situation.

Aside from the hit-or-miss headlight styling and other little nitpicks, the Street Triple R is pretty much the ideal sporty daily ride in every way, especially considering the less than P1,000 per cc price. 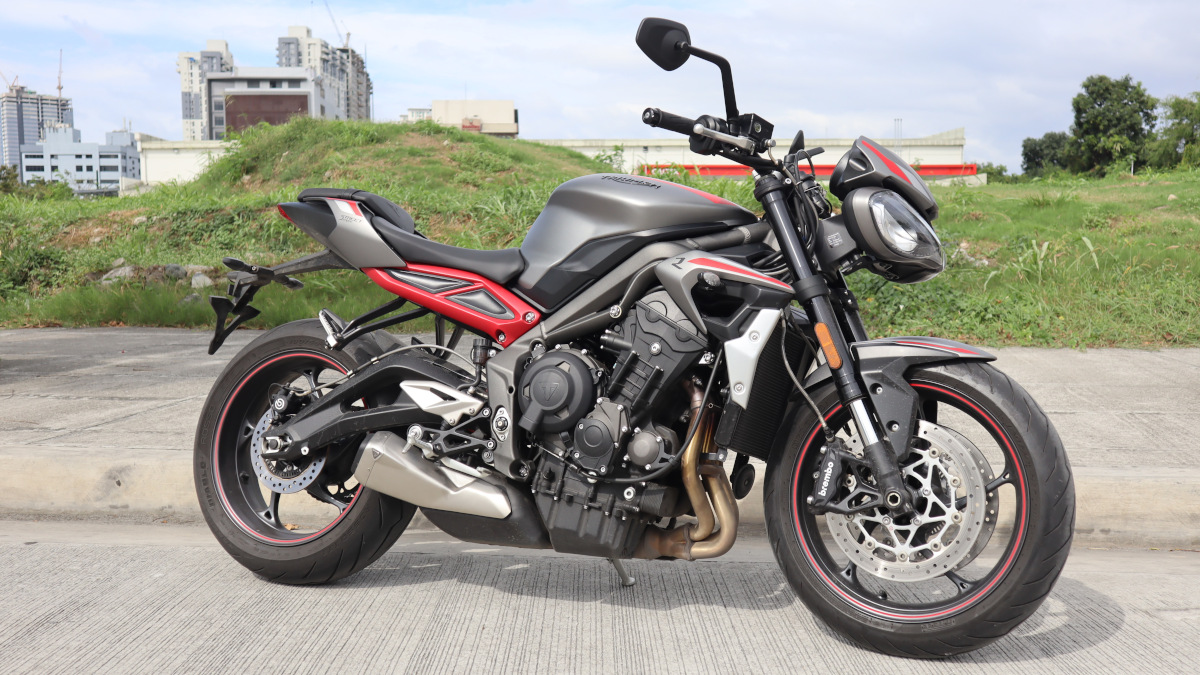 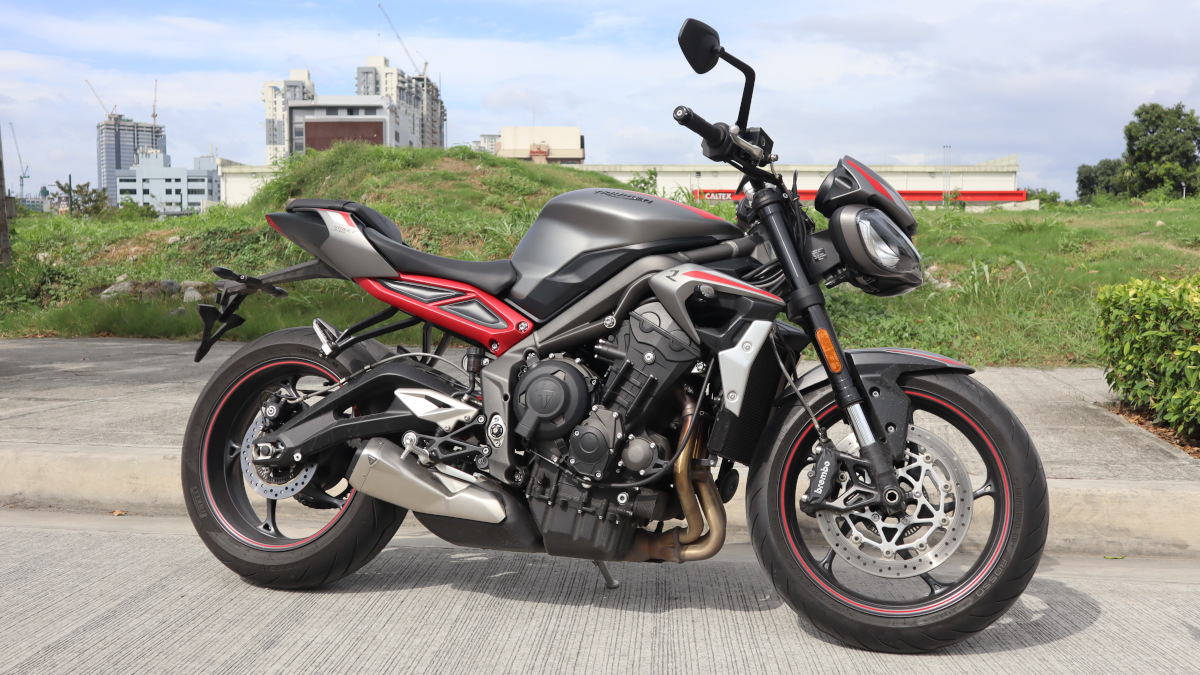 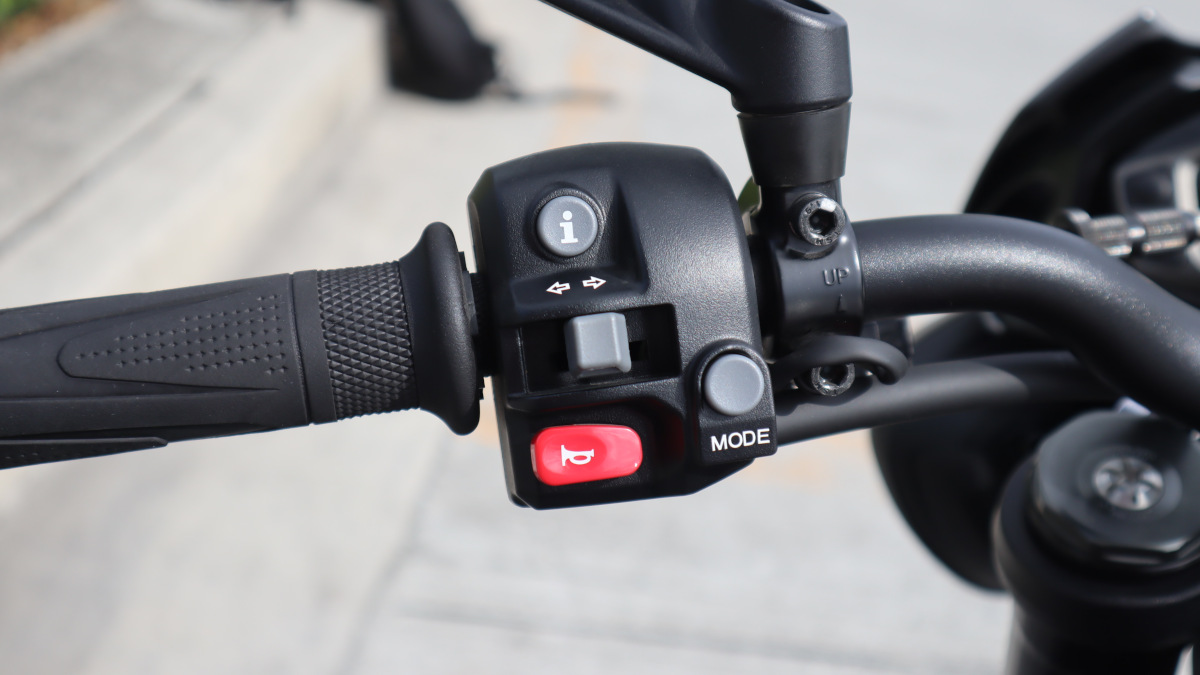 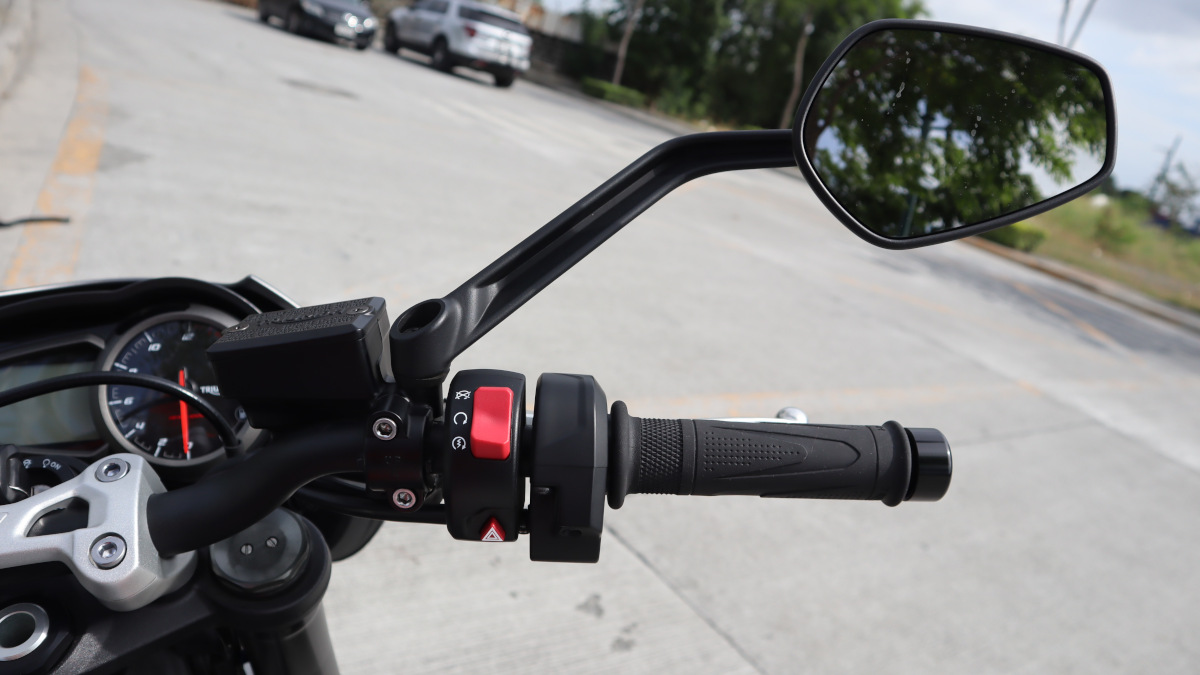 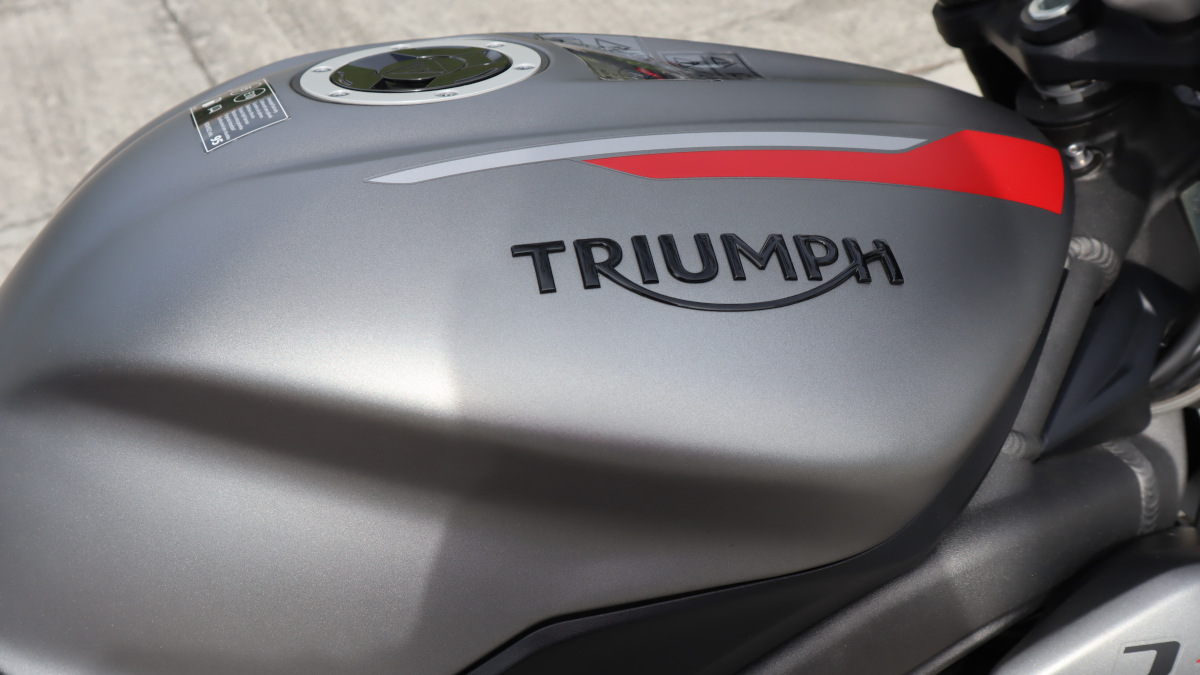 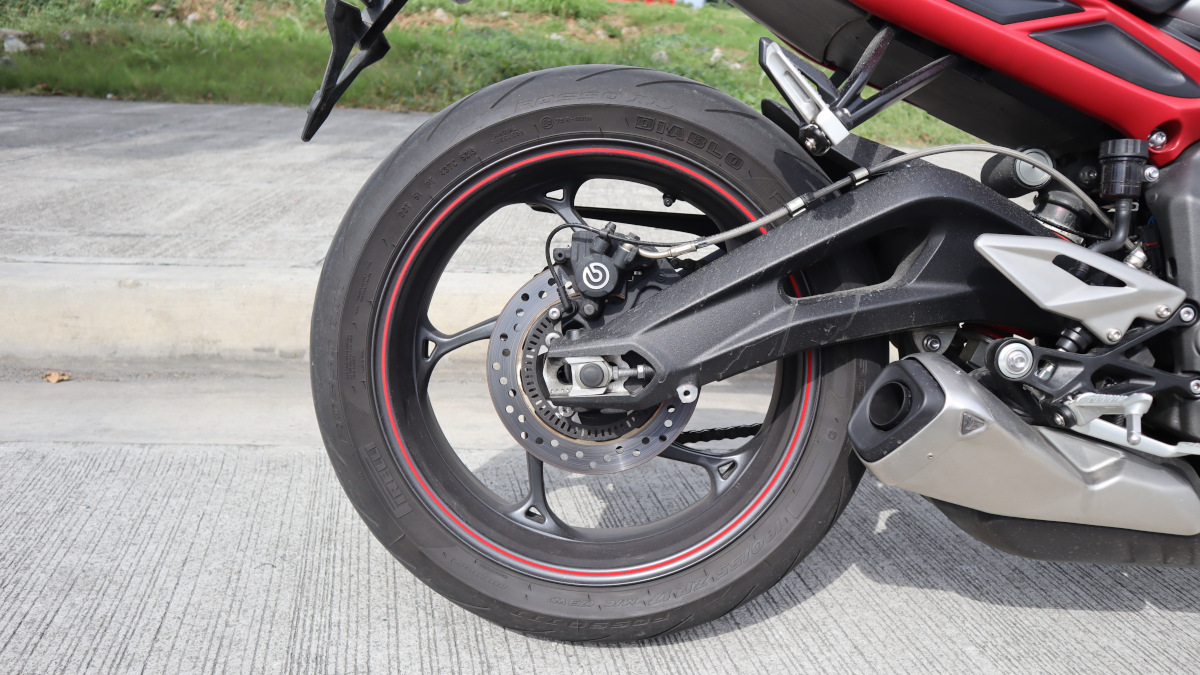 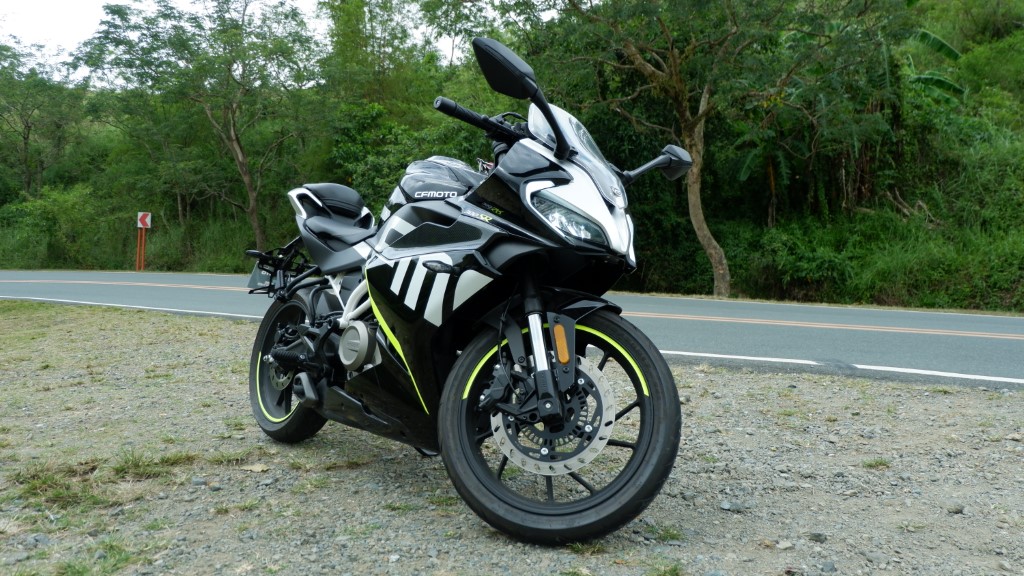 Review: 2021 CFMoto 300SR
View other articles about:
Read the Story →
This article originally appeared on Topgear.com. Minor edits have been made by the TopGear.com.ph editors.
Share results:
Retake this Poll
Quiz Results
Share results:
Take this Quiz Again
TopBikes Rating:
/20