Who exactly is the target market for dual-sport bikes? Could it be off-roaders who need a machine for both the streets and the trails? Or maybe it’s taller riders who don’t fit on smaller bikes? Or is it Filipino commuters who have to deal with unpaved roads, sneaky potholes, and frequent floods? We think it’s all of the above. Dual-sports are among the most versatile motorcycles, making them a great fit for our unpredictable conditionins

One such all-around two-wheeler is the Yamaha WR155R. Officially launched in the country earlier this year, this 150cc-class bike is part of Yamaha’s WR lineup, which is known for off-road performance. With dirt-racer looks, tall suspension, a high and narrow seat, semi-knobby tires, and a torquey single-cylinder engine, the new WR seems like a potent choice for tackling trails. But what about its usability on the road? We borrowed a unit from Yamaha Motor Philippines and used it as a daily errand-runner to find out. 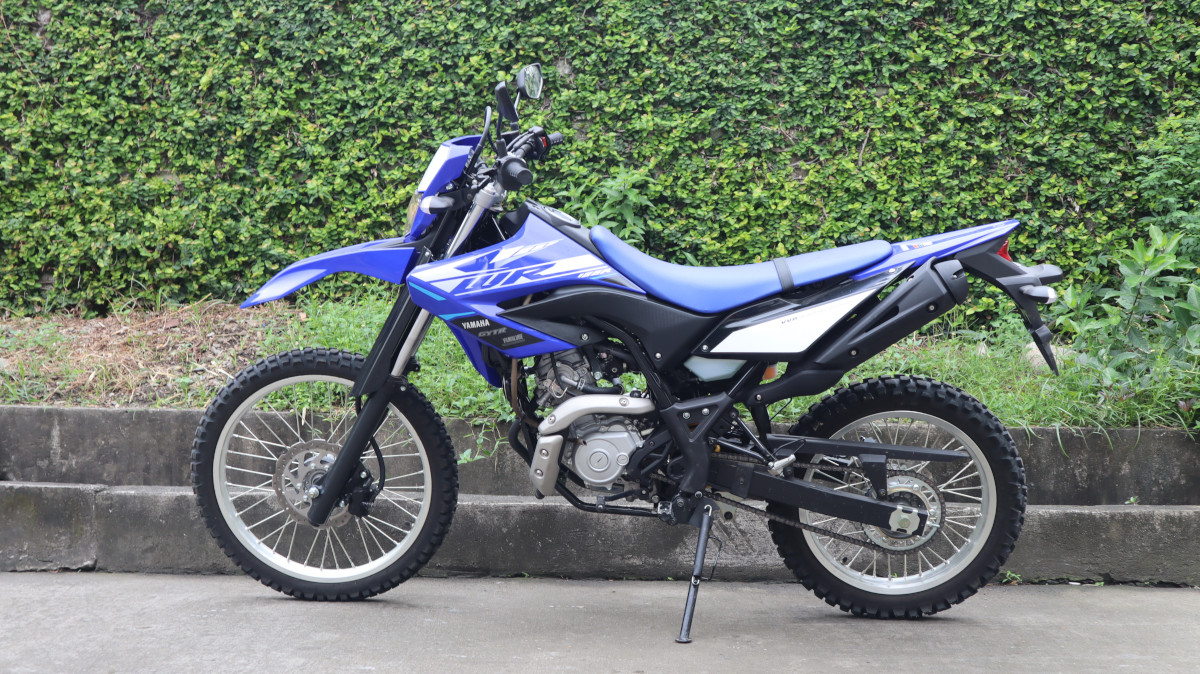 The WR155R is what we would describe as a ‘ street-legal dirt bike.’ Every component, save for the mirrors, license plate holder, lights, and turn signals, looks off-road-ready.

The first noticeable thing about this WR is its tall seat and super slim body. In addition to helping the bike achieve off-road capability, these characteristics give it a lightweight, performance-oriented image. Another striking visual aspect of the WR is the color: Yamaha Race Blue. The brand’s official racing color also looks dashing on their street bikes, as demonstrated by the WR155R’s bold blue livery complete with race decals.

Some might see the WR155R and assume that it’s a 125cc, which goes to show how well Yamaha can pack a lot of power and performance into a slim package. This diminutive width also helps other parts of the bike pop, such as the 41mm front fork, sizeable radiator, 21-inch front and 18-inch rear wheel wearing semi-knobby tires, high-mounted exhaust, and narrow metallic-looking seat.

With all of its off-road racing bits out on display, the WR155R would look at home on the trail, out in the mountains, or even in the concrete jungle. 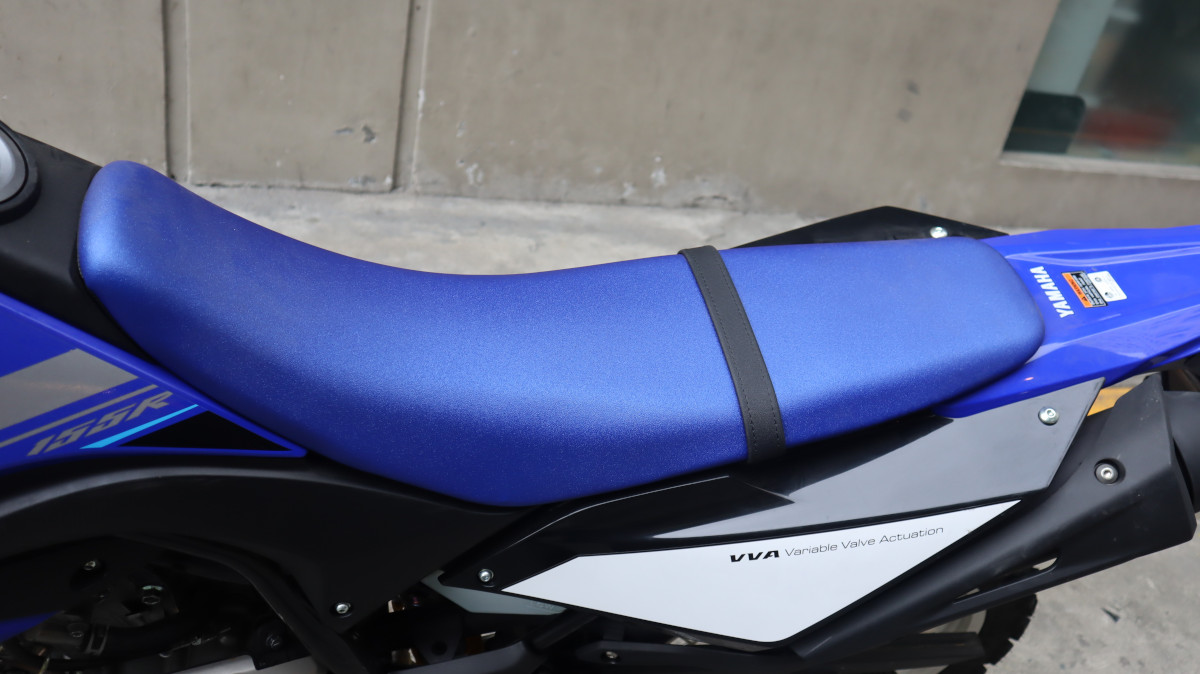 Typically thin and flat to facilitate better off-road maneuvering, the seats on dual-sport bikes do not have the best reputation when it comes to comfort. The WR155R’s seat is no different, with minimal cushioning and barely enough width for an adult rear.

Unsuprisingly, the ride started to get uncomfortable even on short 20-minute rides. While the plank of a seat serves a purpose, a bit more thought put into comfort would’ve been appreciated for a bike that should handle both on- and off-road duties. When hustling on rough terrain, however, the seat does not have any stray bits to snag on and works with the grippy metal footpegs to allow the rider to smoothly and quickly shift their weight.

The riding position is pure dirt bike—upright with wide handlebars, as well as a commanding view of both incoming obstacles and the ever-present metro traffic. The 34.6-inch seat height sounds daunting, but is balanced out by the WR’s light 134kg weight and narrowness between the legs. While not our first choice for urban maneuvering wth, the WR and its 125cc-like width and weight make filtering pretty easy. Shorter riders, however, should take care as the bike’s height might prove to be a bit challenging in tight spots or low-speed situations.

Passenger accommodations on the WR155R are spartan, to say the least. The only indication that you could possibly take a passenger are the rear footpegs, since there is no additional length to the flat seat. There’s also nowhere on the bike for a passenger to grab onto. 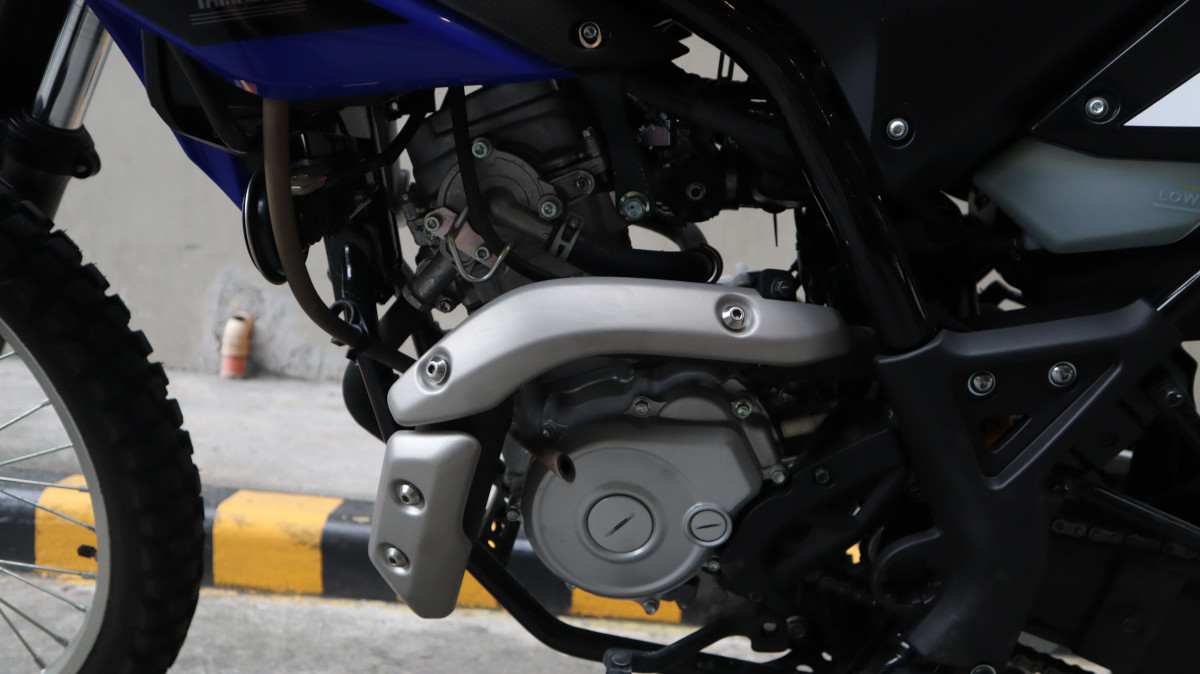 Supplying the WR155R with power is a 155cc SOHC single-cylinder, liquid-cooled engine. This rowdy power plant, combined with the bike’s 134kg curb weight and slick-shifting six-speed manual gearbox, makes for an enjoyable ride.

The engine’s power feels impressive, and it offers abundant torque even even at low revs. When taking off at stoplights, the Variable Valve Actuation-equipped 155cc sends enough torque to the rear that a careless rider could just slide right off the flat seat. Aside from making the bike fun to launch from standstill, the plentiful torque is also great for going up steep inclines and lifting the front end to get over bumps off-road.

One drawback commonly associated with torquey small-displacement dual-sport engines is the lack of power in the higher rev rangse for high-speed cruising. The WR155R, however, easily cruises at 100kph without much drama or excessive engine vibrations. Still, the WR wouldn’t be our long-distance bike of choice, given the total lack of wind protection and the stiff seat. 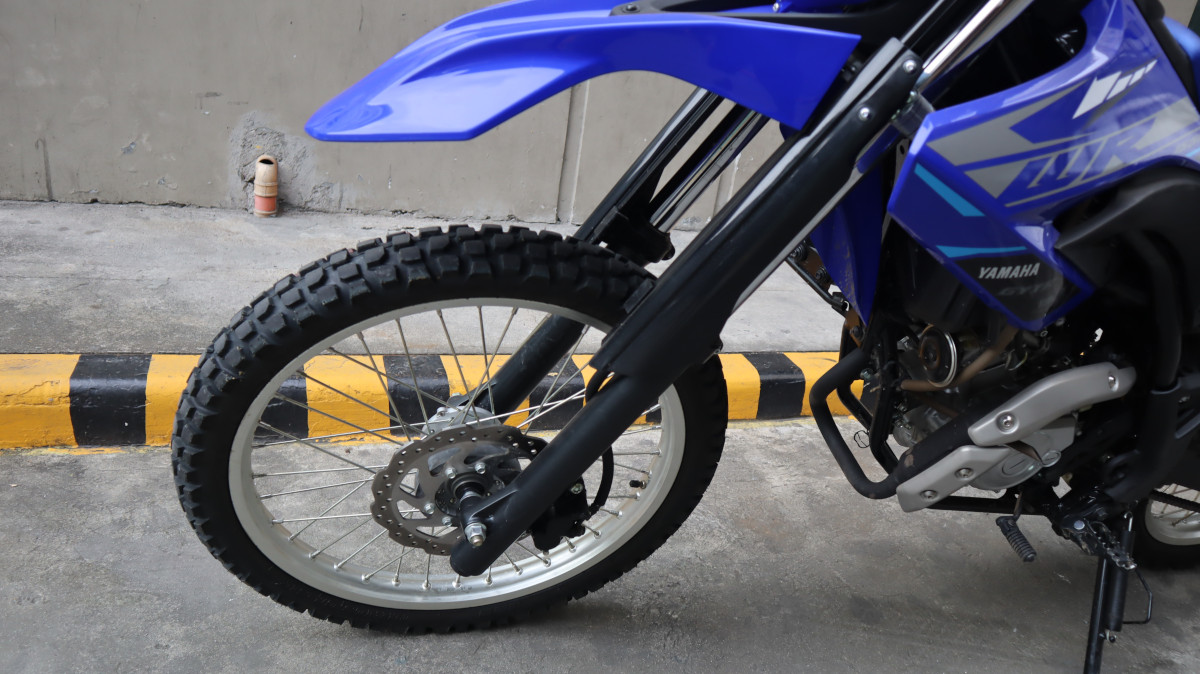 Long-travel suspension, high-ground clearance, light weight, and knobby tires are all hallmarks of a good off-road machine, and the WR155R has all of these. On uneven terrain, the taut suspension absorbs every dip and bump expertly. We even sought out potholes and humps to feel the suspension work its magic. The front and rear disc brakes without ABS are more than enough for off-road use, providing ample stopping power while allowing for intentional slides and skids.

On the road, the WR155R’s semi-knobby tires still have enough grip on asphalt, on top of responsive handling and competent brakes. The handlebar is not only wide for better leverage and control, but also vibration-absorbing properties to reduce rider fatigue. 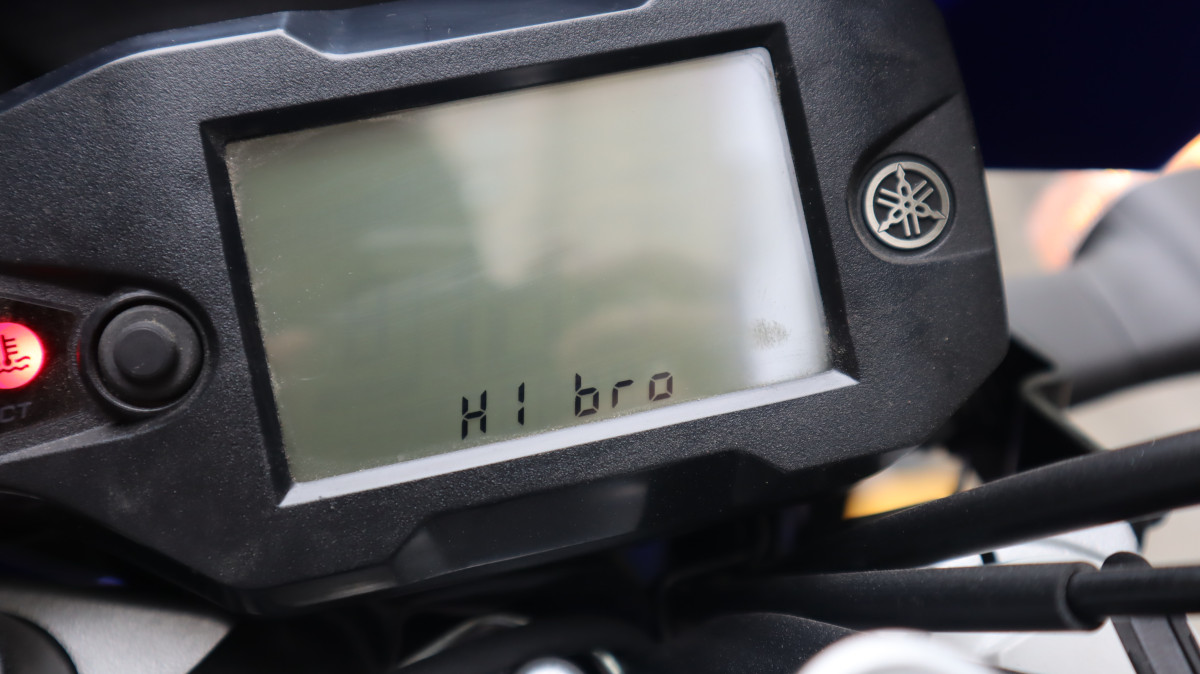 Dual-sport bikes typically don’t have much in the way of extra features, as most of their components are meant for performance. That isn’t to say that the WR155R lacks any neat extras.

While simple and rugged-looking, the information display shows more than just the bike’s speed, revs, mileage, and fuel level, but also the gear, the clock, and even a friendly greeting. The bike’s switches feel high-quality and are well-placed. Aside from the usual turn signals, headlight switch, horn, starter switch, and hazard switch, the WR also has a trigger-style passing button on the left handlebar. The grips have plenty of friction for better off-road control, and have a nice ridge that makes throttle control easier and more comfortable.

A backpack or cargo rack is a necessity if you need any more storage than your pockets. Only the bike’s registration can fit in the the little tool pouch stored next to the battery under the left fender. The side stand, meanwhile, is tall and sturdy. 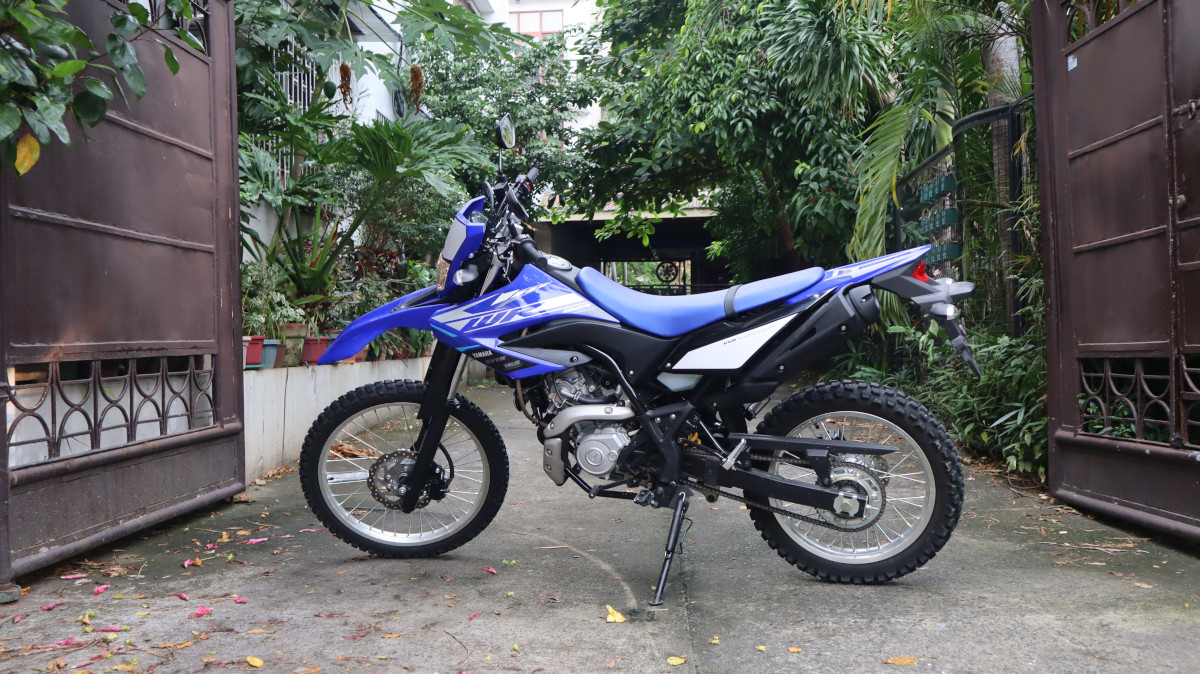 With the looks and performance of a real”off-roader, Yamaha’s WR155R is more than serviceable for street duty. The newest addition to the Japanese manufacturer’s dual-sport lineup would do well out on provincial roads, on the trail/dirt track, and during the rainy season.

Save for the tall seat, the WR155R is a promising option for a versatile daily ride that can handle anything the metro or wilderness can throw at it. 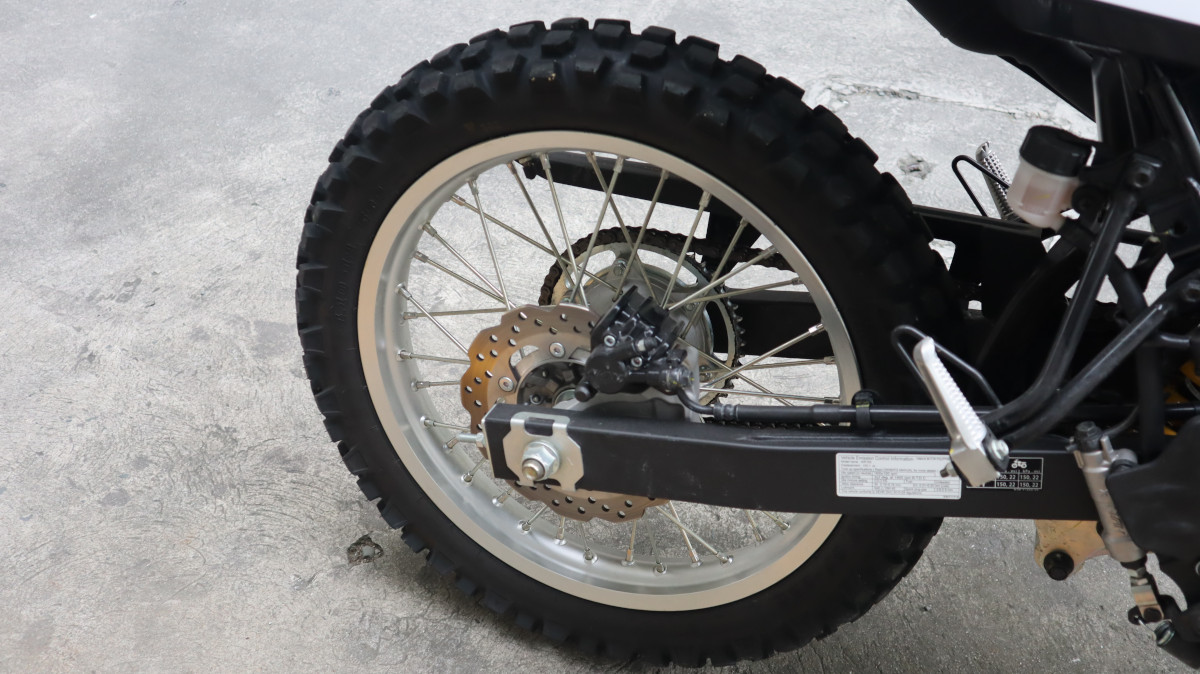 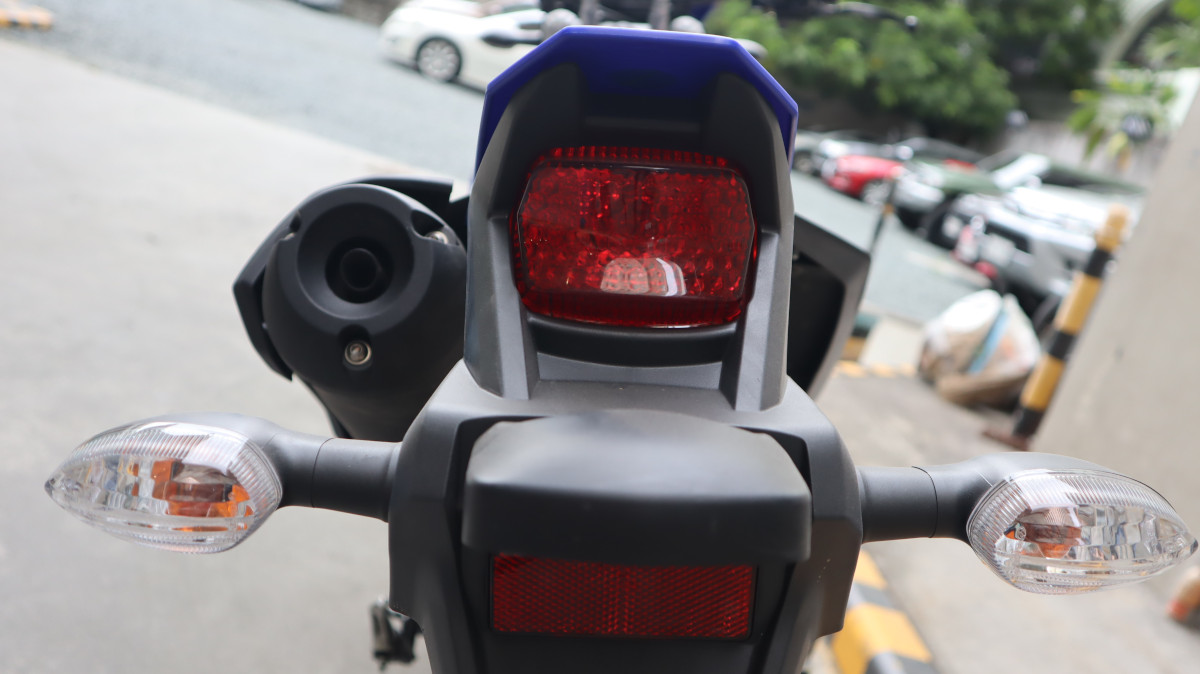 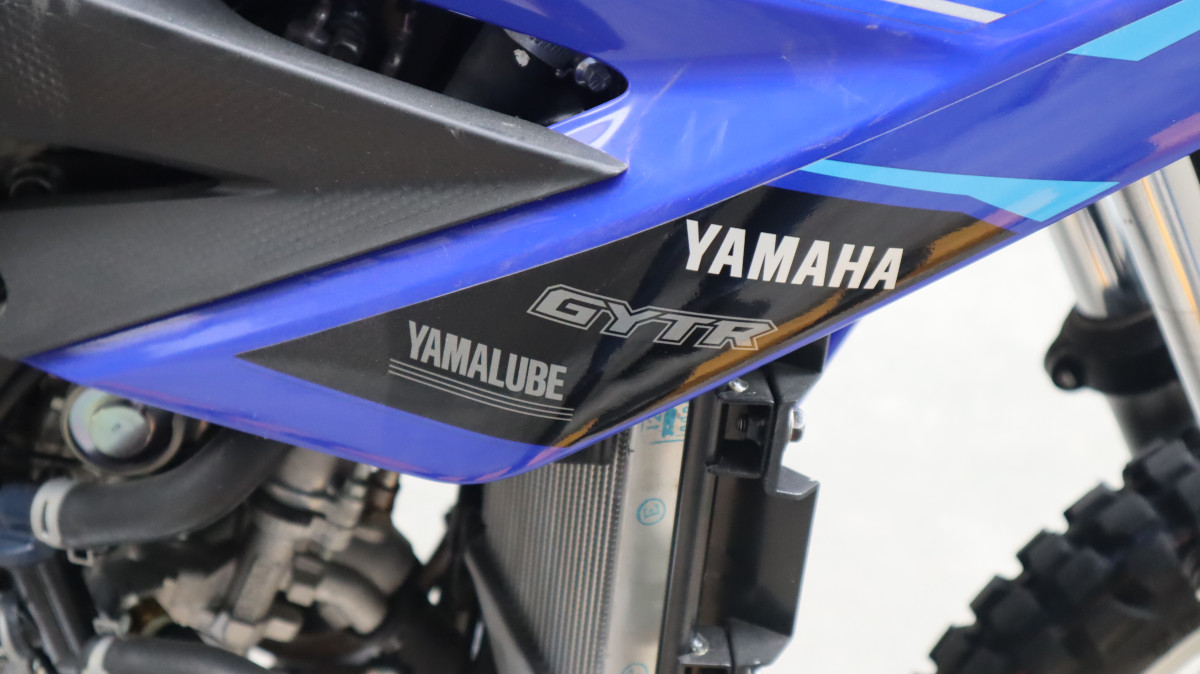 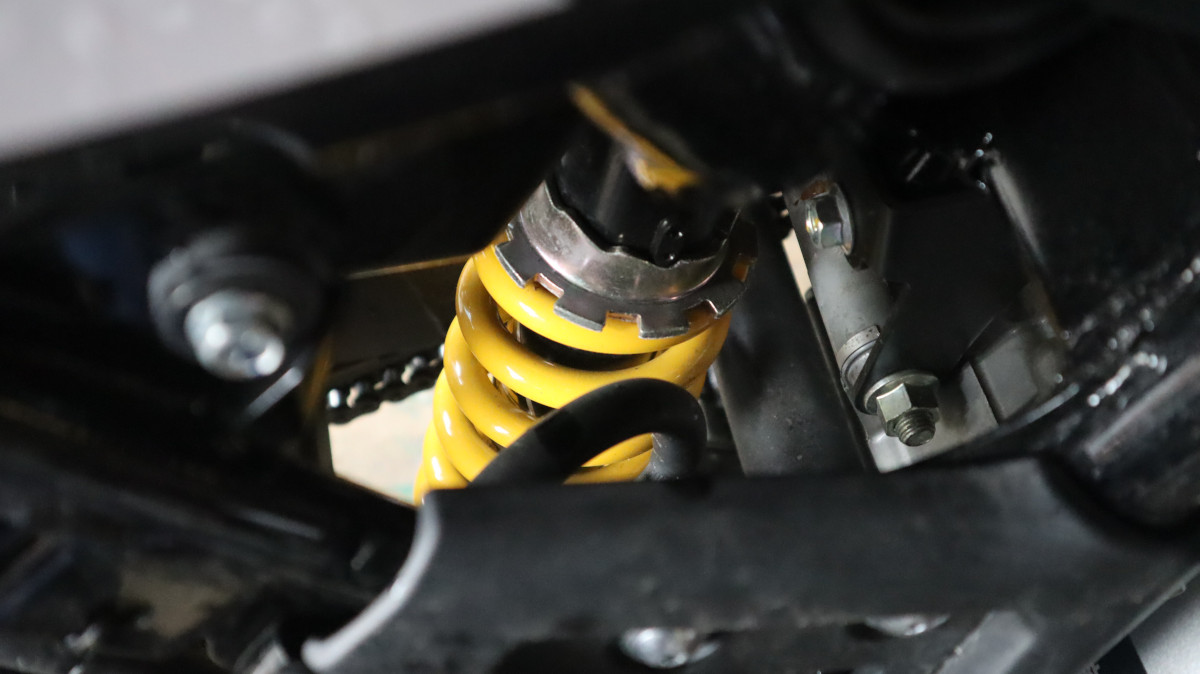 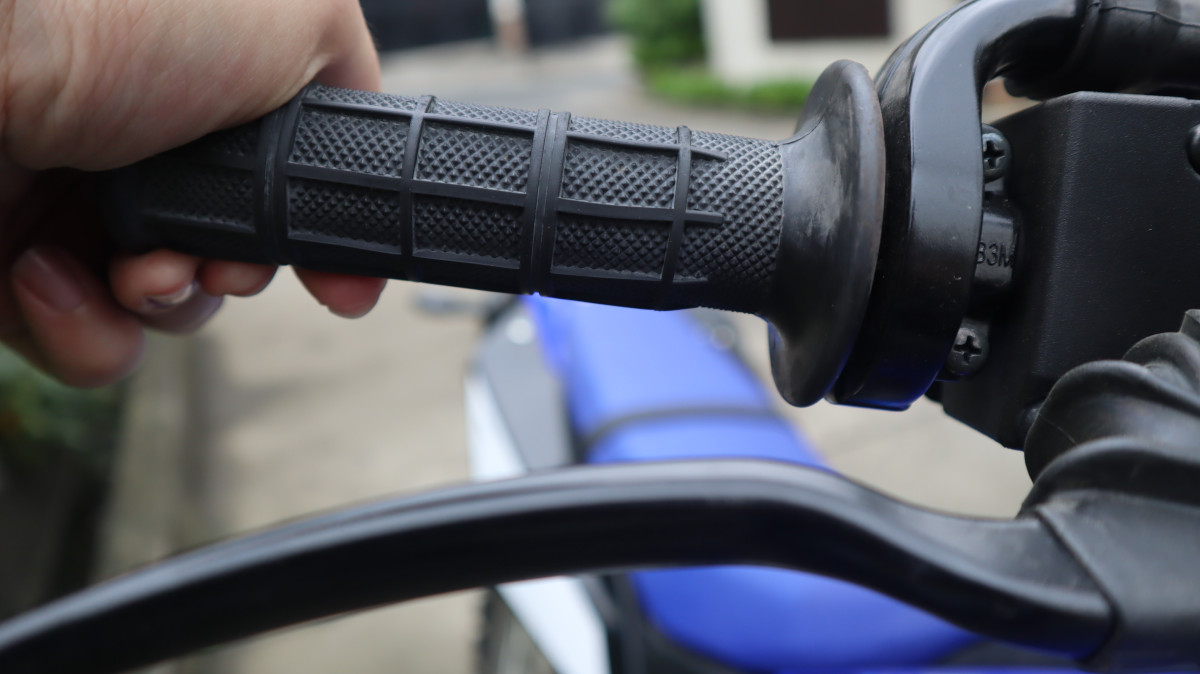 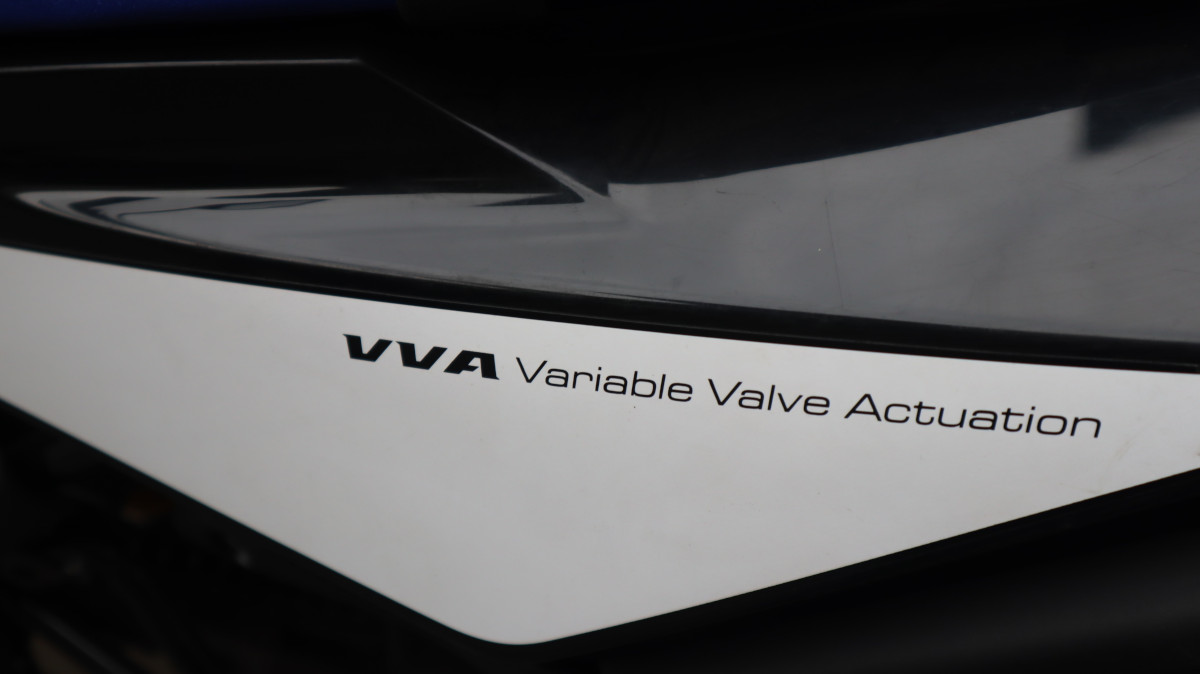 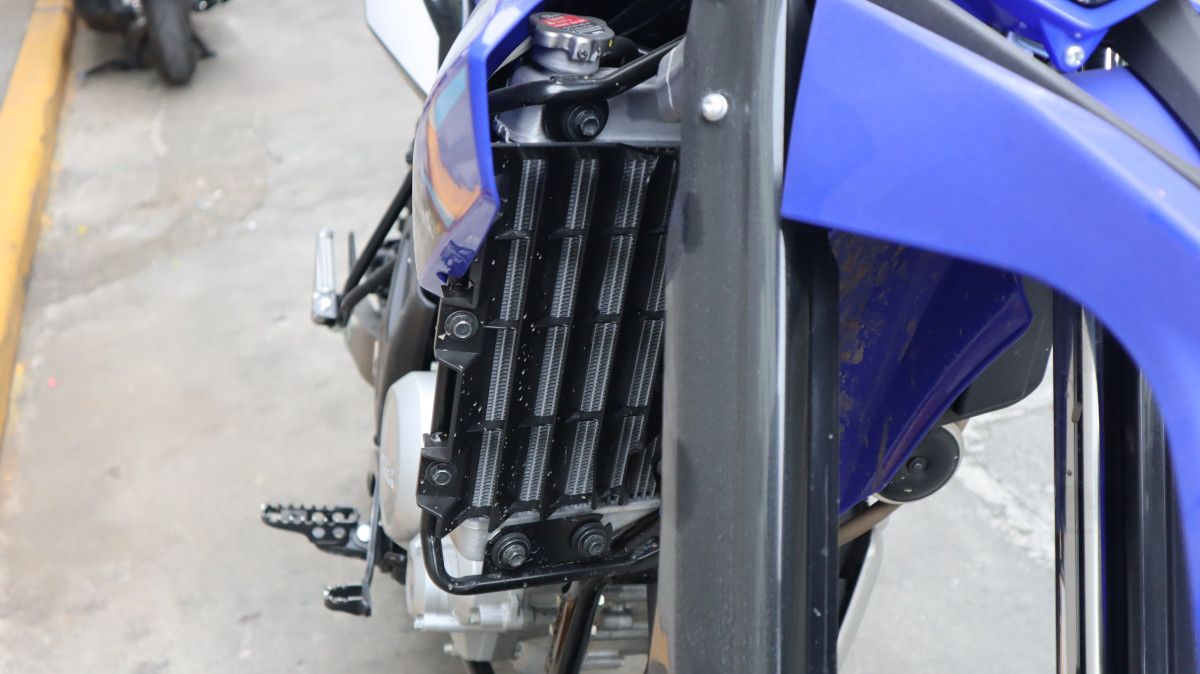 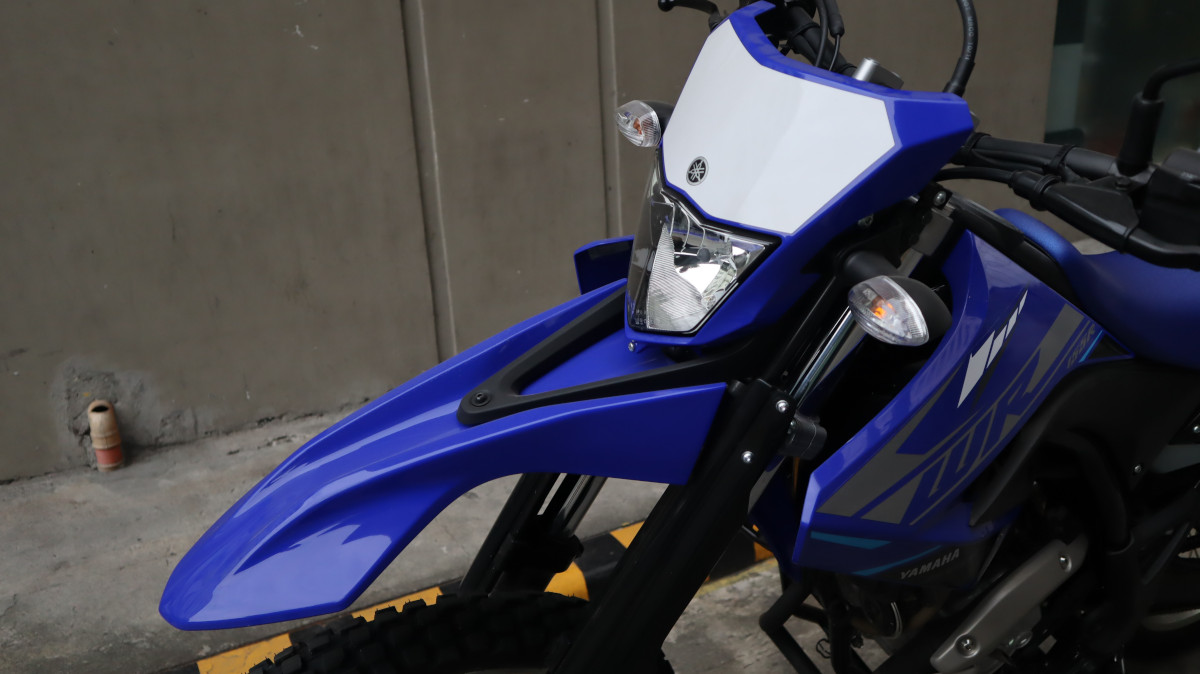 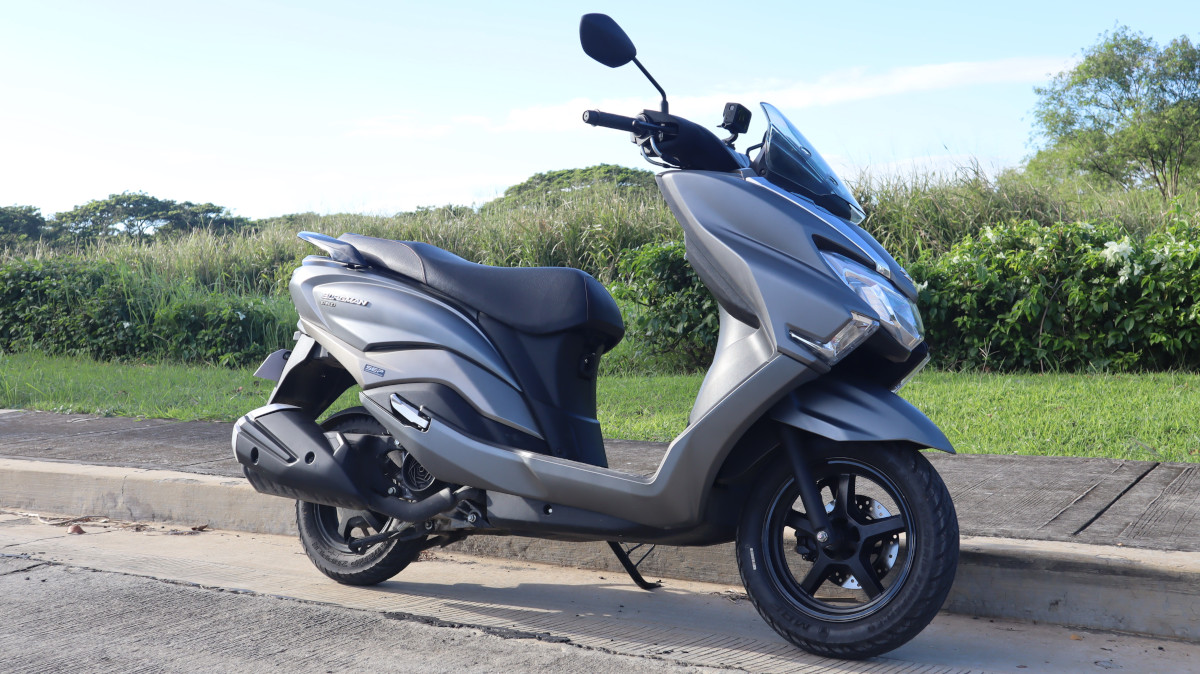