Are you considering this tollway-legal Husqvarna?
by Matthew Galang Feb 25, 2021

Previously, we took a look at the Husqvarna Vitpilen 401, a sleek and suave neo-retro-looking cafe racer with sportbike ergonomics. This time, we gave its more upright counterpart, the Svartpilen, a try. It’s essentially the same bike as the Vitpilen with different tires and ergonomics, so this review should be pretty much the same, right? Well, it’s not quite that simple.

With few key differences between the two Husqvarnas, as well as my now increased familiarity with the Husqvarna 401 platform, the experience I had with the Svartpilen, or ‘Black Arrow’ in English, was quite different from its sibling the ‘White Arrow.’

Just how different? Read on to find out. 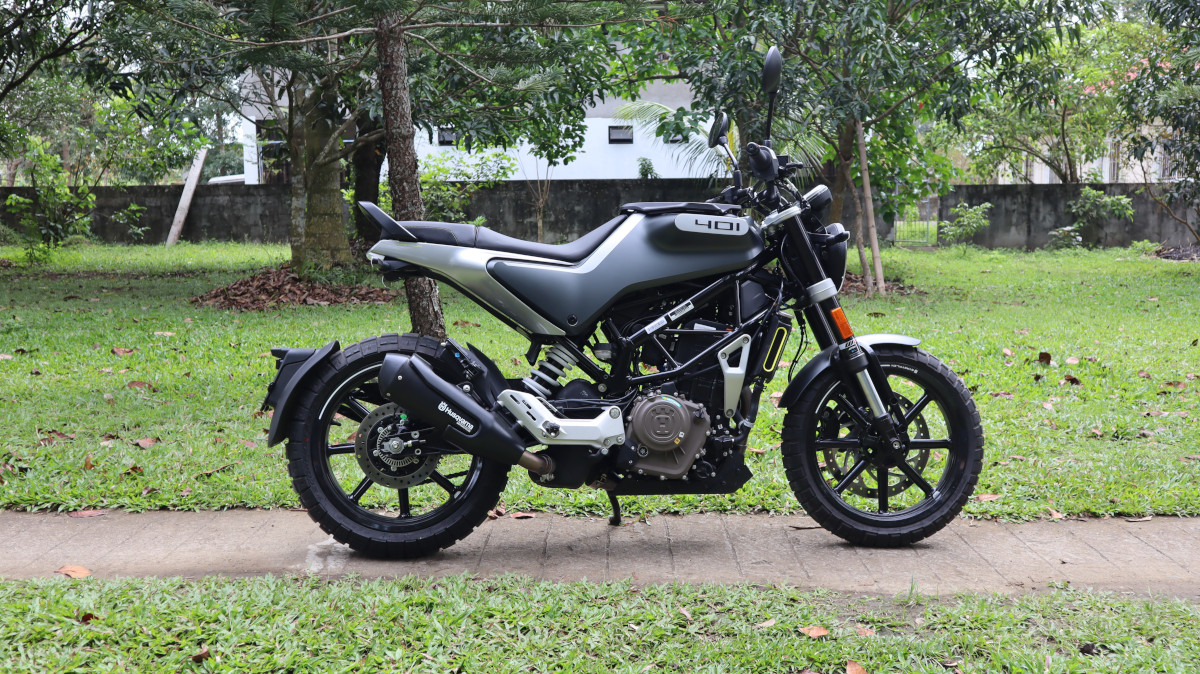 Being nearly identical to the Vitpilen, the Husqvarna Svartpilen 401 is also just as drop-dead gorgeous. Well-thought out proportions, retro style with a futuristic twist, and minimalism are the key ingredients for the twin bikes. This approach obviously works, as evidenced by the number of compliments and stares I received riding both models.

Where the Svartpilen differs from its cafe racer twin in terms of styling, the changes Husqvarna made to this bike make it a bit more practical. One of these changes is the handlebar, which is now a wide bar that not only offers significantly more comfort than the Vitpilen’s clip-ons, but also gives the bike a more approachable, sorta scrambler-ish look. Adding to the scrambler aesthetic are the tires, which are semi-knobby Pirelli Scorpion Rally STRs.

Not all of the practical additions to the Svartpilen are aesthetically pleasing, however. Take the grab handle, for explain. Where the Vitpilen doesn’t have one, the Svartpilen gets a sizable car-spoiler-looking piece that looks out of place on the otherwise clean-cut tail. 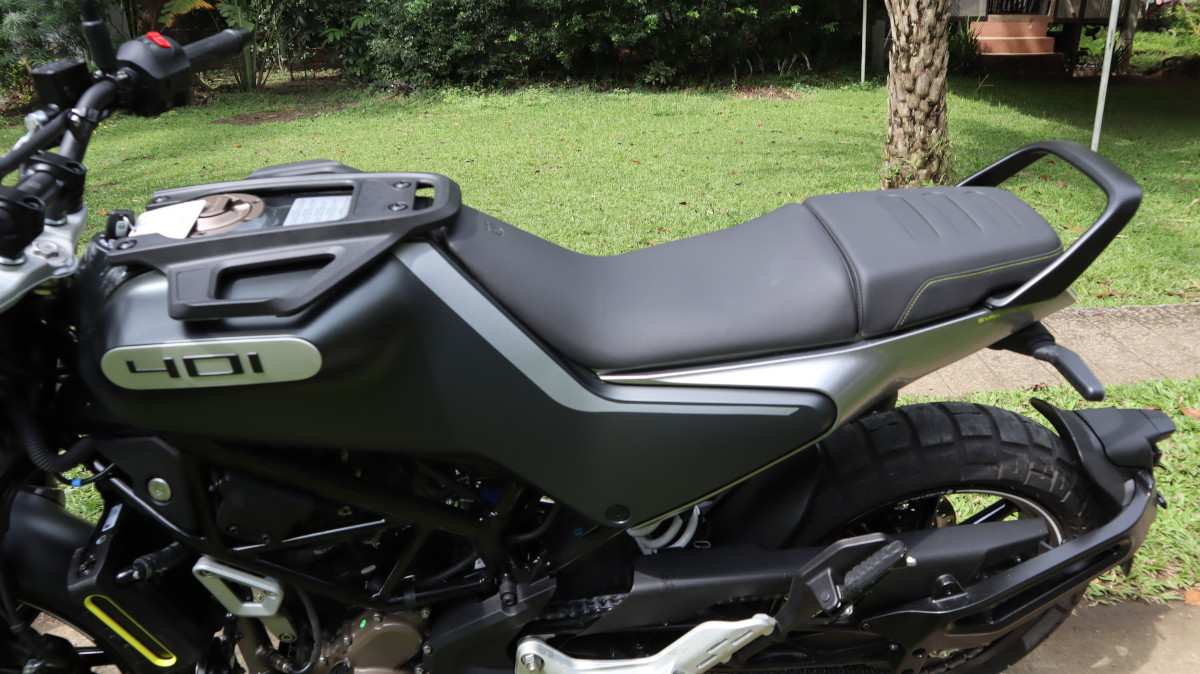 After riding the Vitpilen 401, swinging a leg over the Svartpilen and experiencing its upright ergonomics was a welcome change of pace from the former’s hunched-over position. The handlebar here is wide and easy to work, the foot pegs aren’t positioned all the way back, and the riding position is neutral, making for a less stressful experience.

A couple things while on the saddle do feel a bit cheap, though, such as the circular gauge cluster, which is lacking in screen quality and becomes hard to read under direct sunlight. Another negative is the metal support brace running across the handlebar, which not only makes it hard to attach a phone mount, but essentially signifies that Husqvarna went for the cheaper option on the metal used for the setup.

Something people might consider an oddity in the saddle area is the luggage rack/bracket thing mounted on top of the tank. The plastic piece doesn’t necessarily look out of place on the bike since it follows the tank’s shape, and it serves as a nice place to affix small cargo or bags. It also doubles as a good spot to put your helmet and gloves on when stopped, so I see it as a useful little addition. 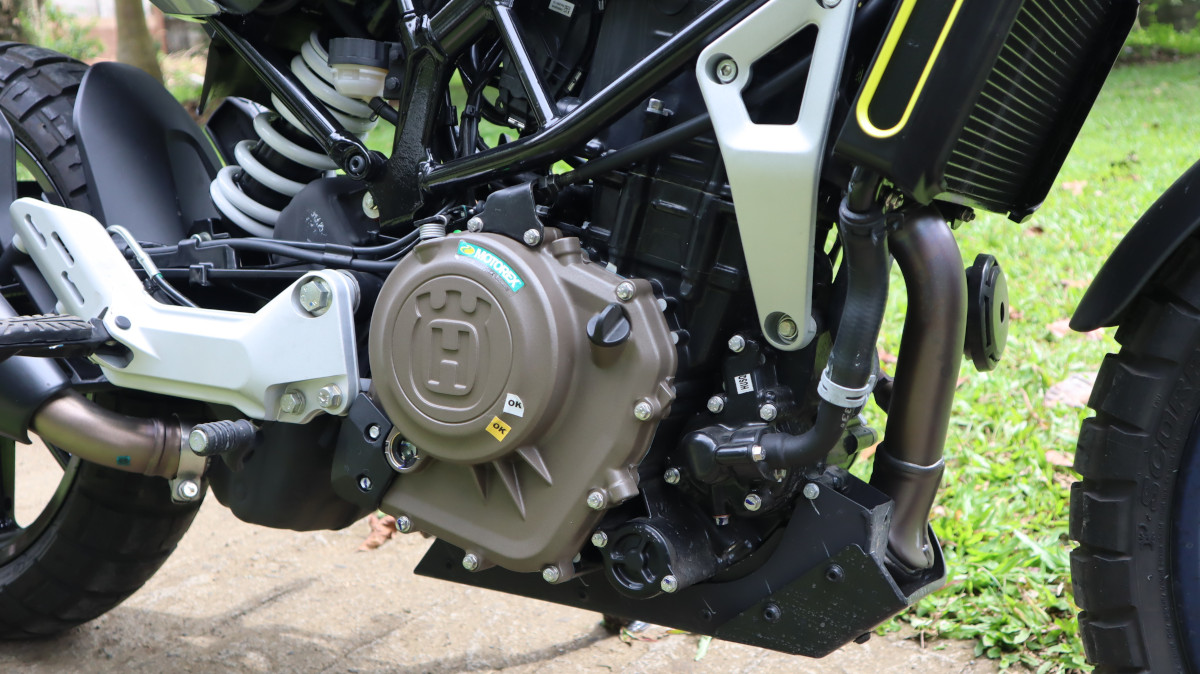 Fitted with the exact same engine as the Vitpilen, the Svartpilen’s performance is pretty much identical. Peppy acceleration and smooth revs are all part of the 373cc (400cc officially) liquid-cooled, single-cylinder mill capable of 43hp at 9,000rpm and 37Nm of torque at 7,000rpm. As a mostly road-focused bike with some light off-road capability, an engine like this is a very good thing to have.

The transmission is the same six-speed manual as on the Vitpilen, and it features smooth shifting, a gear shift and position indicator, and gearing that prioritizes acceleration and off-the-line response over top speed. 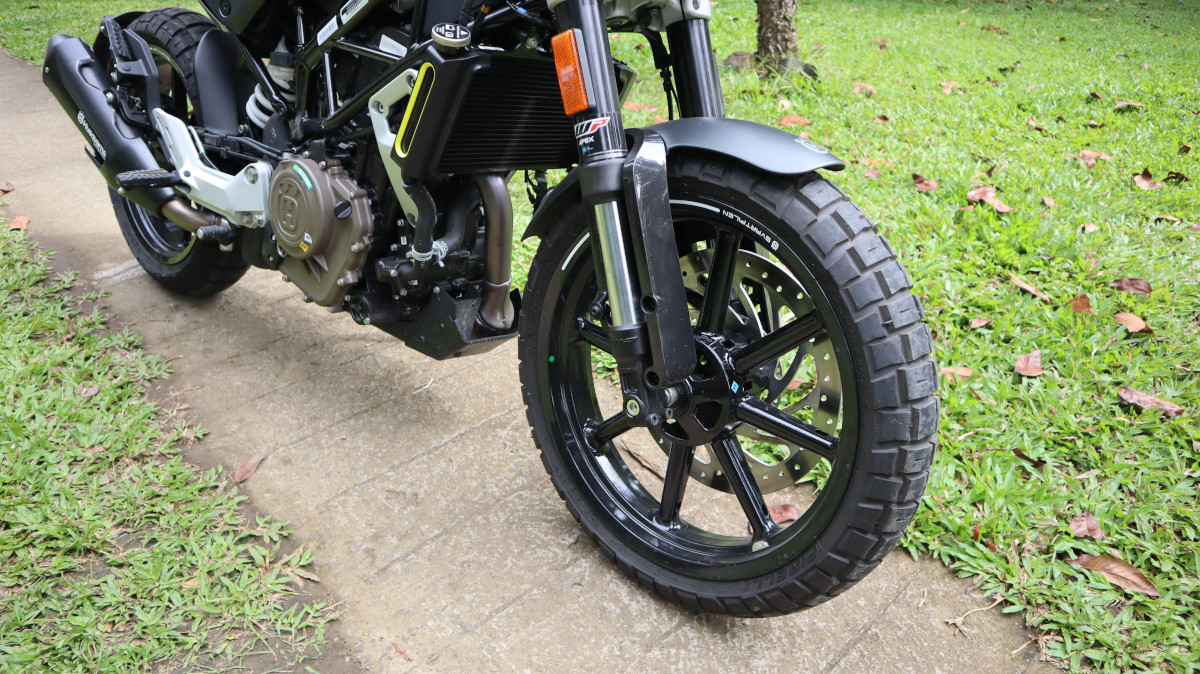 The Vitpilen’s sharp and sporty handling characteristics carry over to the Svartpilen—they share the exact same WP Apex suspension setup, after all. With its higher and wider handlebar and semi-knobby tires, however, the Svartpilen feels a bit more supermoto-like compared to the Vitpilen’s sportbike character. This change is something I thoroughly enjoyed as I flicked the bike from side to side and around corners with ease.

Braking response on the Svartpilin is also similar to the Vitpilen’s, as both are fitted with the same Bybre calipers and rotors. With that in mind, the Svartpilen tends to dip forward under heavy braking, no doubt caused by the large diameter rotor that’s slightly overkill for the bike’s relatively light weight. While not as noticeable as the dip on the Vitpilen, it is still notable enough that the Svartpilen feels like a stunt bike at times.

On the road, the Pirelli Scorpion Rally STR tires provide enough grip to feel like sporty street rubber, but aren’t quite as sharp as the Metzelers on the Vitpilen. In light off-road situations, the Svartpilen can hold its own with relative ease. Don’t take it anywhere too technical, however, as there’s not enough ground clearance to tackle rocky terrain without the chance of damaging the exhaust. 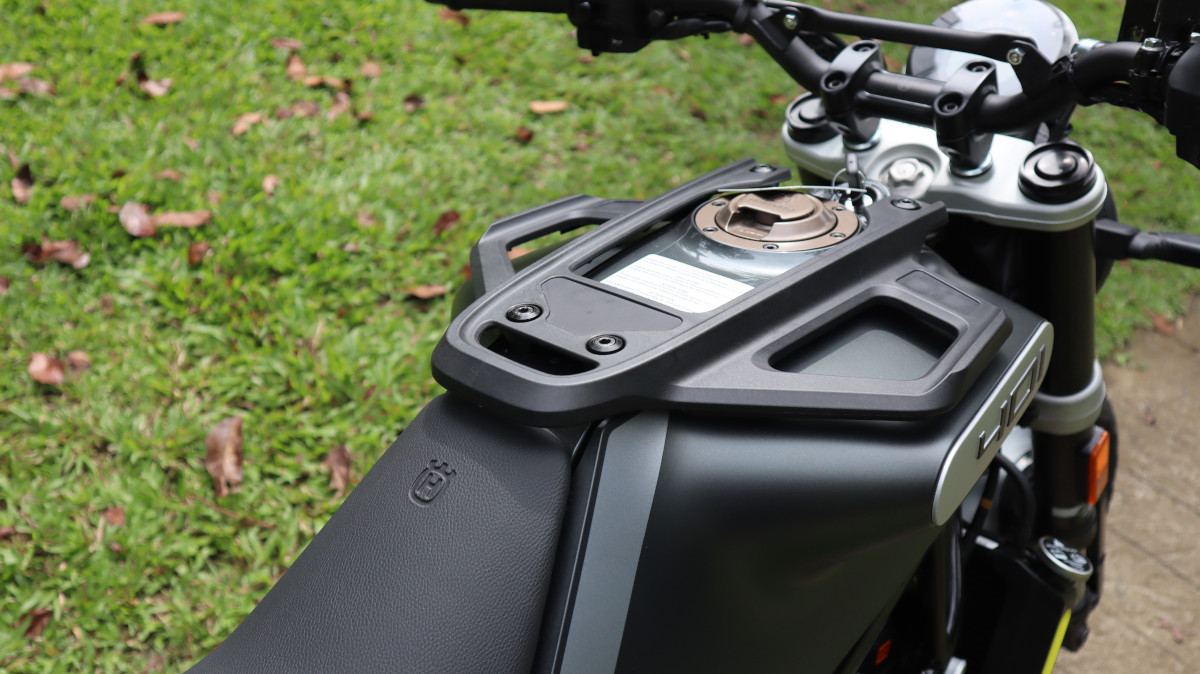 Being the more practical of Husqvarna’s two arrows, the Svartpilen is a little better equipped for everyday life than the Vitpilen. Usable features include the aforementioned tank-mounted luggage rack and odd-looking grab handle, as well as a Supermoto ride mode accessible through the digital gauge cluster. This allows the rider to lock up the rear for some real supermoto-esque fun.

Also exclusive to the Svartpilen is a split two-piece seat which has a slightly different look and feel compared to the Vitpilen’s single-piece. Another addition here is a plastic shroud over the muffler that protects the parts most likely to get scuffed by the rider or the passenger. 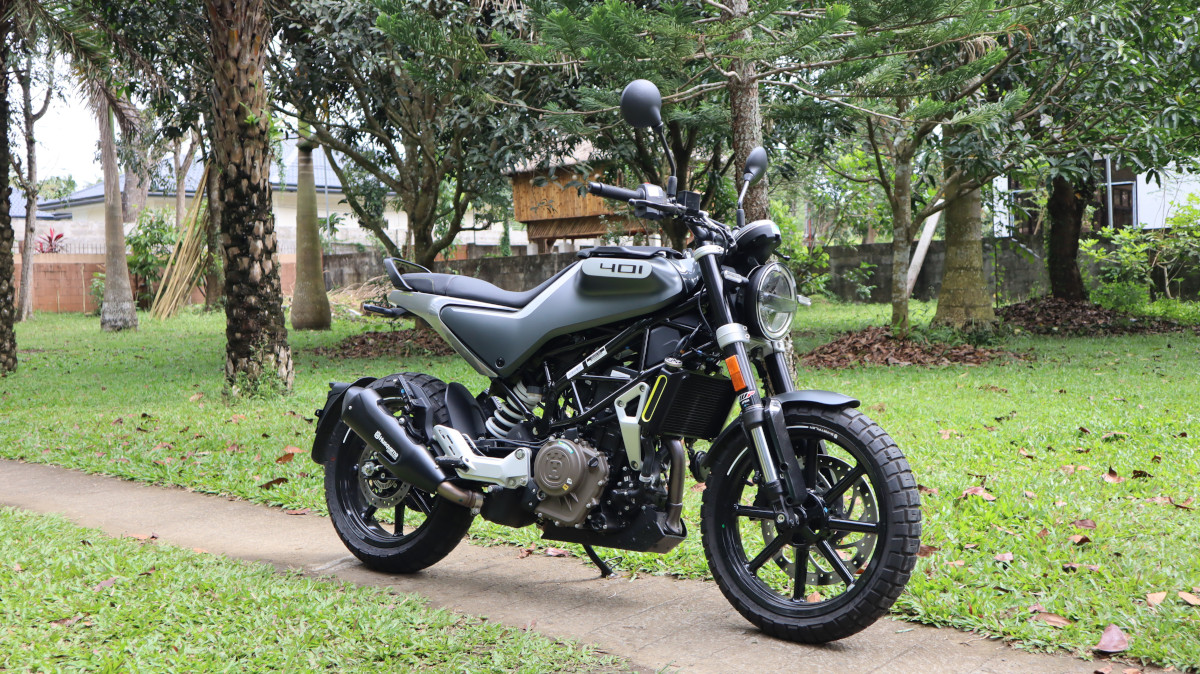 Comparing the Vitpilen and the Svartpilen, the Svartpilen is easily the more commuter-friendly of the two bikes, with more comfortable ergonomics, more practical features, and slight off-road capabilities that make it ready for pretty much anything you could encounter on Philippine roads.

Where the Vitpilen has the edge, however, is in the styling. The cafe racer better embodies Husqvarna’s minimalist direction, and keeps itself free of the slight dullness that the Svartpilen gained in exchange for more practicality.

While the P26,000 premium the Vitpilen commands can be considered worth it if the slick style is what you’re after, the Svartpilen’s more well-rounded approach is hard to beat at this price point, even if it’s not quite as cool. 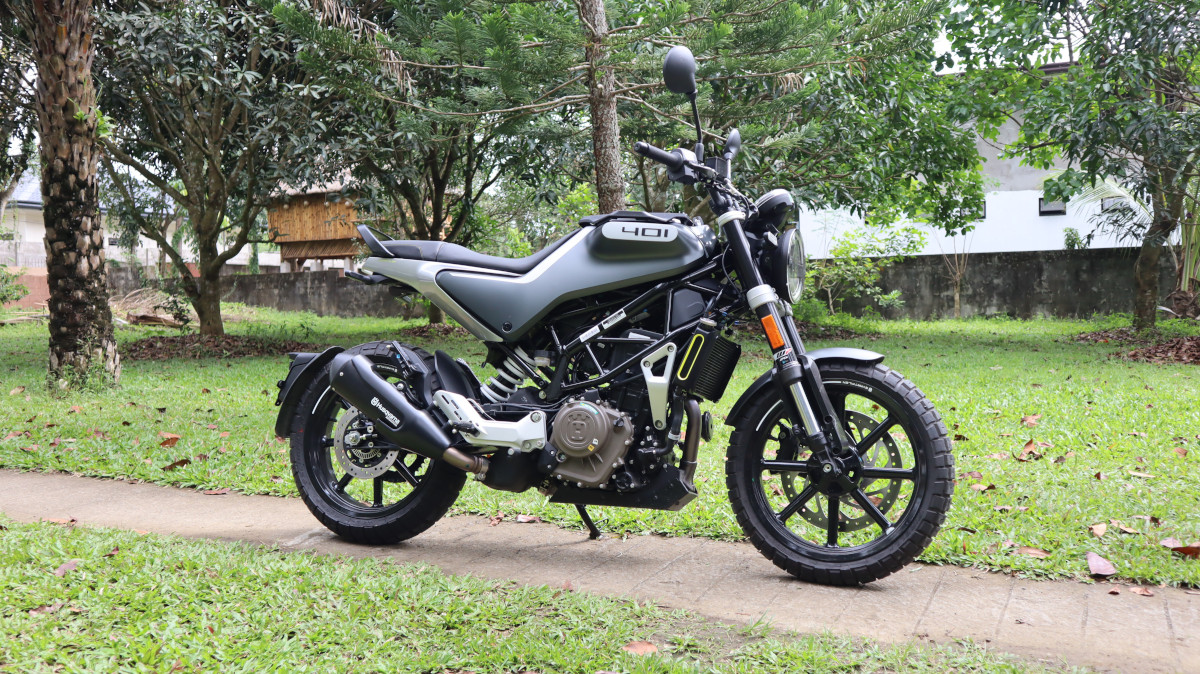 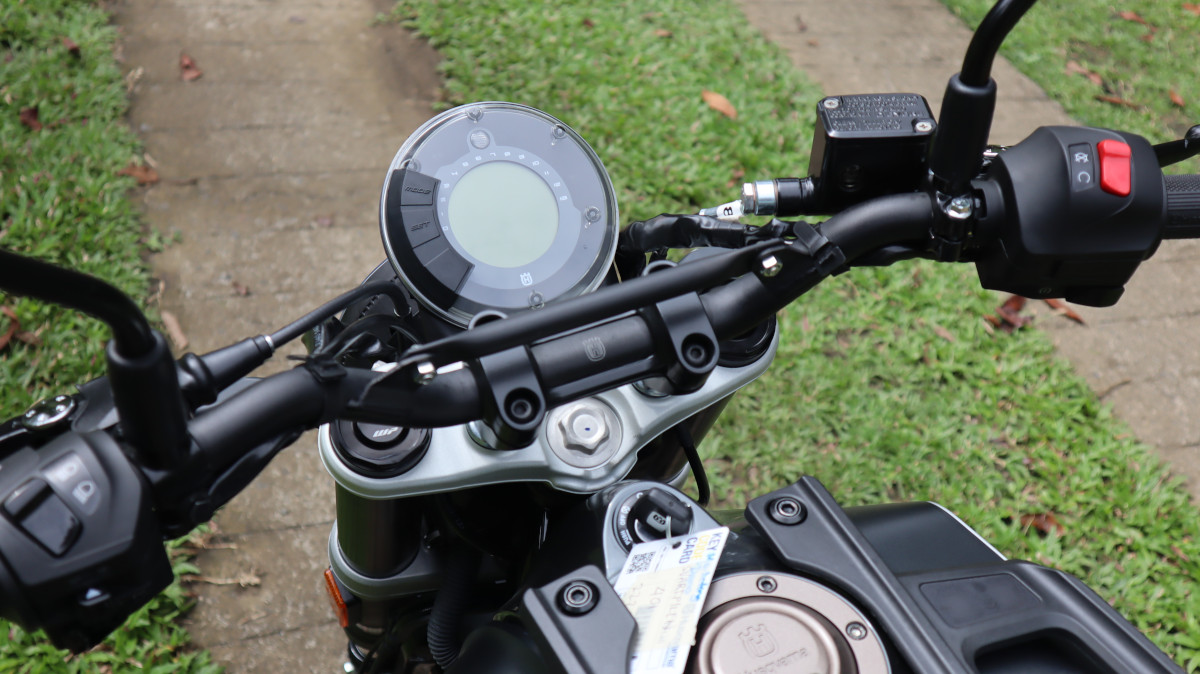 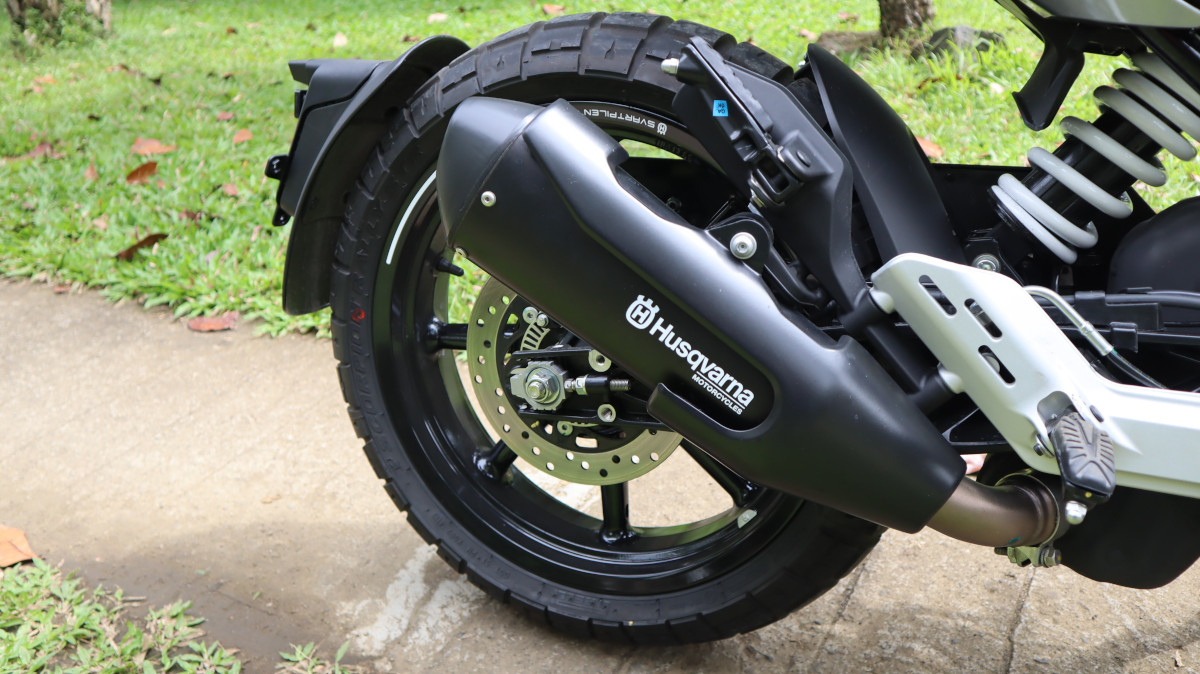 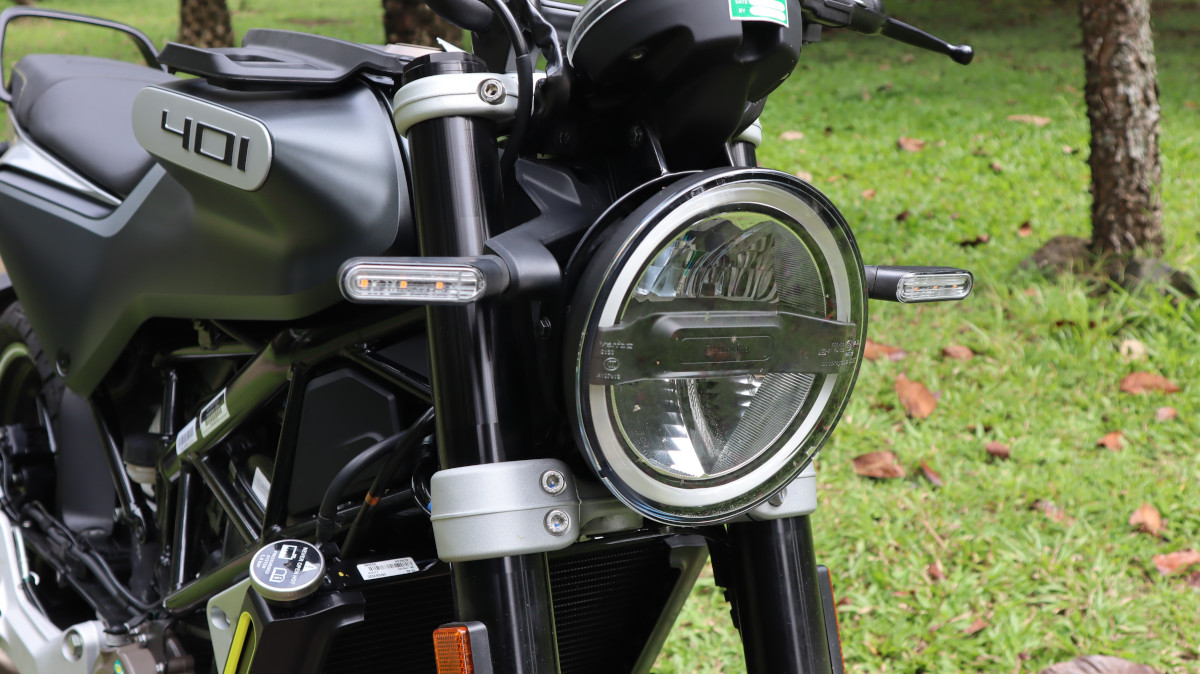 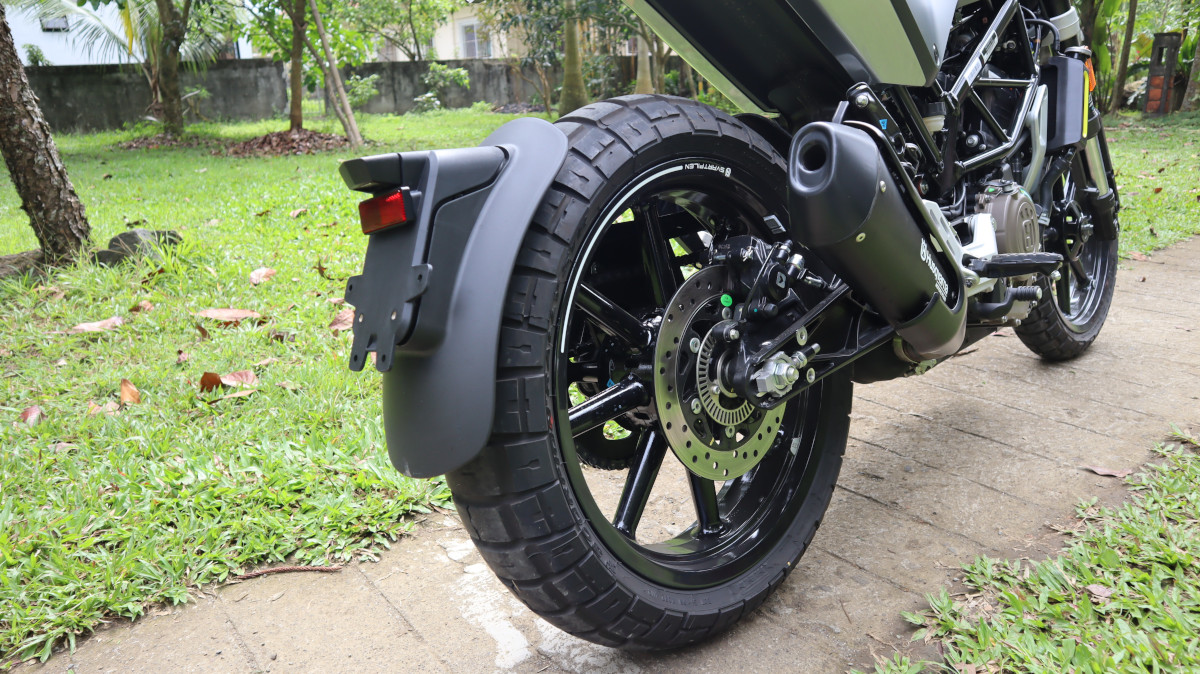 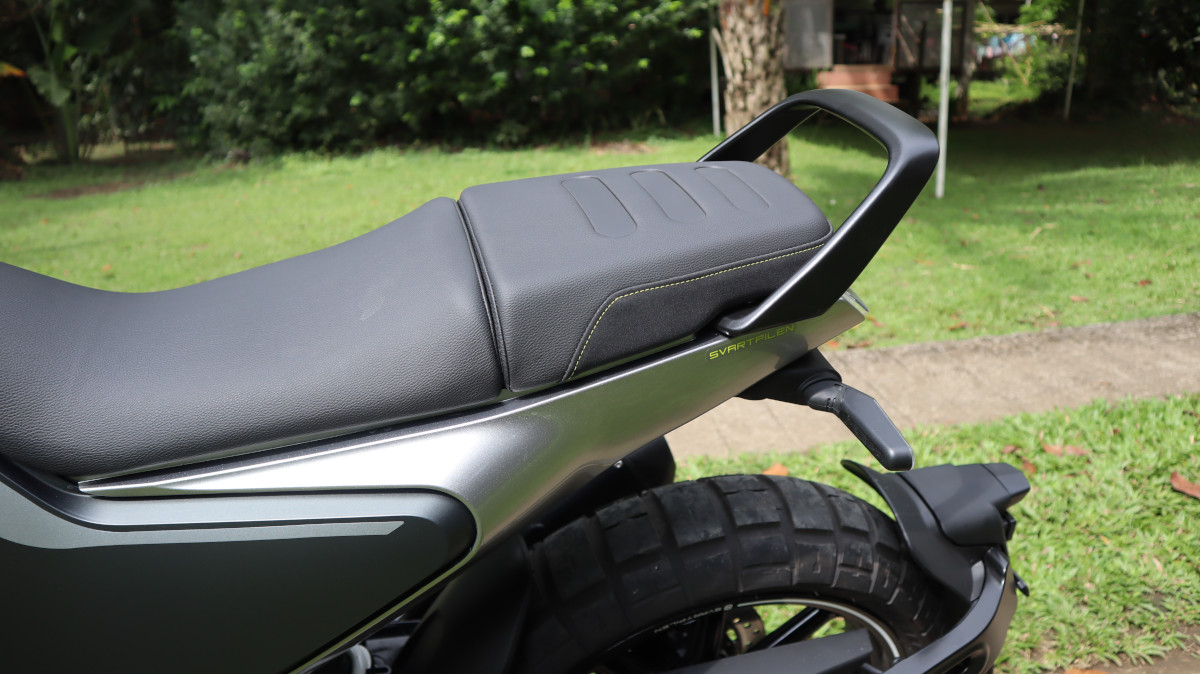 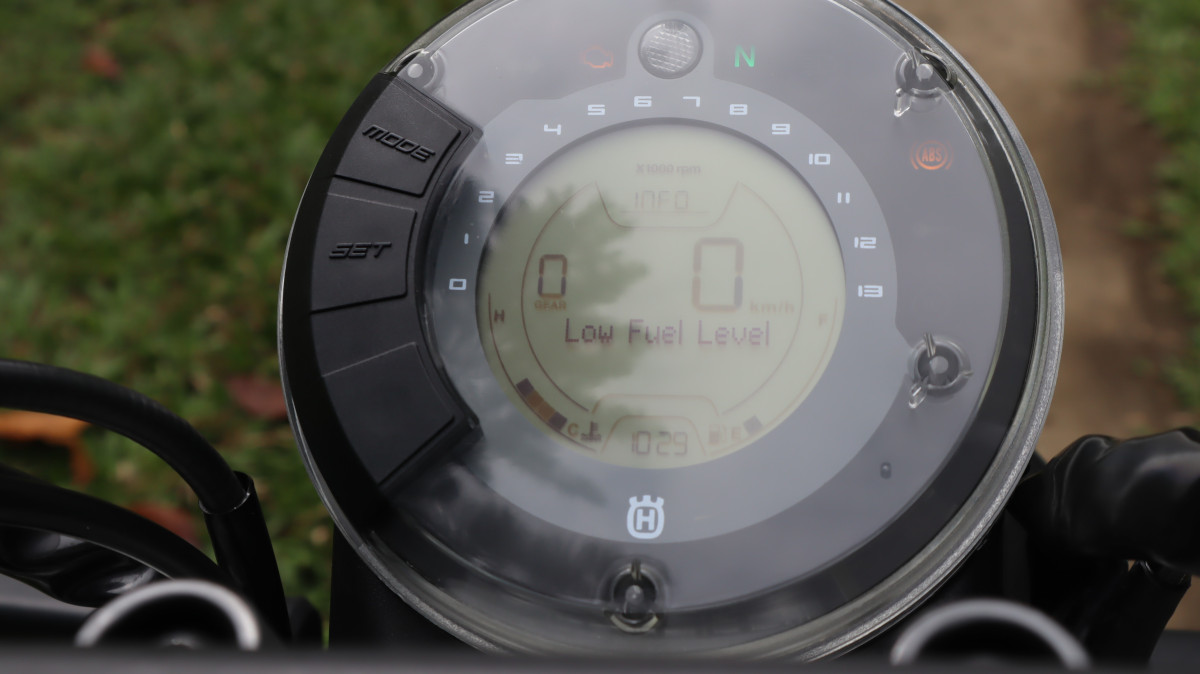 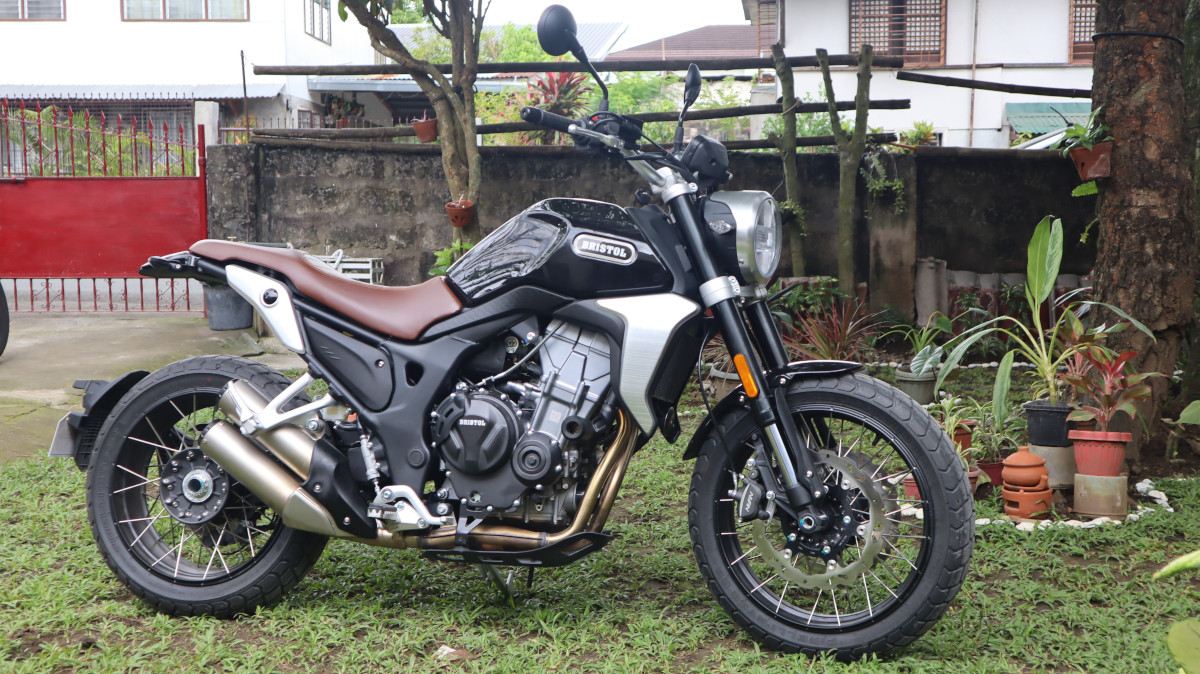 Watch: A countryside ride with the Bristol Veloce 500
View other articles about:
Read the Story →
This article originally appeared on Topgear.com. Minor edits have been made by the TopGear.com.ph editors.
Share results:
Retake this Poll
Quiz Results
Share results:
Take this Quiz Again
TopBikes Rating:
/20